This train is rather hot, and packed. I am not sharing a compartment this time, this is one of those new-fangled intercity carriages that feels more like an elongated aeroplane than an Hercule Poirot setting. Ah, capitalism. Romance has gone out the window in favor of pragmatic design. Wasn't it just two days ago i was rolling my eyes at baroque excess?

Let's rewind to yesterday. I woke with much less of a hangover after a relatively quiet evening - a "quinoa and kimchi" burger at some hipster joint and a walk through the more industrial parts of Praha 5. The burger tasted like the one from that cheap vegan punk joint back in F'hain, and - thanks to the Czech Crown - it cost the same too, despite the hipster tax. I took some happy snaps of graffiti and train tracks and a glowing tunnel mouth before shutting my eyes. 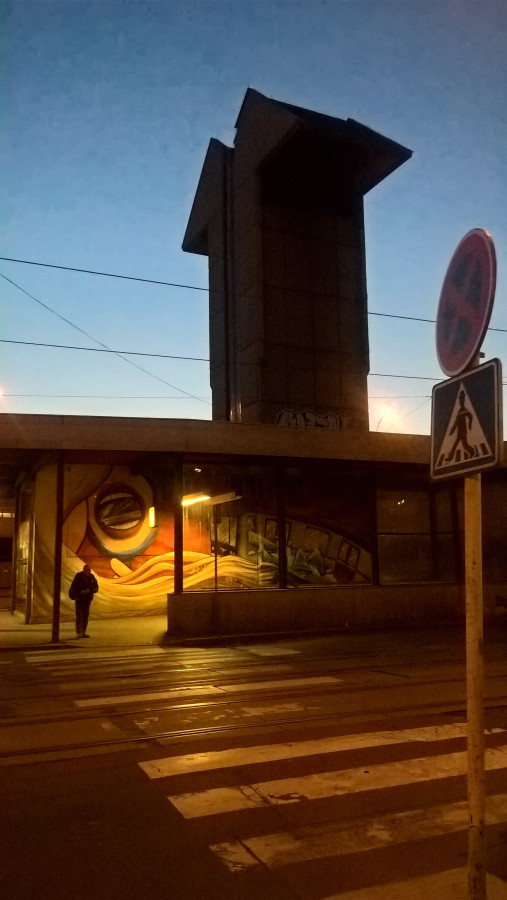 My breakfasts here remind me of when i was traveling in Andalucía a couple of years ago. I fell in love with the "tostada" - half a baguette, grilled, with chopped tomato on top. You could get it with ham, or cheese, but the default was just chopped tomato. Add olive oil and salt and you are done. How could something so simple be so delicious? Little did i realize at the time it would teach me a very simple breakfast that also works in a vegan diet. At a buffet full of tasty-looking eggs and sausages and cheeses and salamis, hogging the tomatoes and nabbing the olive oil from behind the bar let my belly smile.

I decided to walk toward an in-construction high-rise i saw Friday from the castle. I zig-zagged through streets, climbing, then popped out at another cathedral in a fort on a hill. This one was quiet enough i bought a candle and crouched by the Virgin Mary and ... well, i don't really know how to pray, and i am not at all religious, but buying a candle is something i remember doing as a kid when we traveled. I usually take a moment to remember my family and friends who have passed away, send good vibes to people i know who are struggling, then wish for peace and safety on my own travels. I guess that's all prayer is.

My walk continued, atop the berm. I was mystified by the chimneys mushrooming from the packed earth. I may never know what lies beneath. There is a peculiar ignorance when traveling without internet. I forgot what it was like. Nowadays i look stuff up on my phone when it catches my eye. I go into a wikihole, if not at the location itself then back at the hotel. But my SIM is German and the botel barely had internet, which has left me to imagine the history and the utility of everything i see. My Prague is a fantasy Prague, a Prague where dwarves toiled as blacksmiths beneath the berm. Up in the cathedral, a rival bishop built his army. Resentful of the grandeur of the castle on the west bank, he ordered a blockade of the river and intercepted barges carrying coal and iron. Soon his ultimate war machine would be complete, and the king would pay... Well, who knows? Maybe they weren't chimneys at all. Great view, anyhow.

This part of town was Praha 4. Much more residential. I had a fantastic coffee at an Italian coffee shop where no one spoke English. After wandering through some tower blocks i spotted a word i recognized from the night before - tržnice - i assume it means market. Much like the lonely Vietnamese market, it was mostly abandoned - save for a tobacconist. What could cause this, right next to a cluster of tower blocks that surely housed plenty of people who would keep a market bustling?

Oh, right, a giant shopping mall. And beside it, the under-construction high-rises i had seen from the other side of the city. They're a bit of a statement piece - curving to the left and the right like a vase of tulips. I am sure lots of well-to-do Europeans will be very happy with their condos on top of the world. With a shopping mall just moments away. What i didn't expect to find there was a Chinese restaurant. A real Chinese restaurant, not a "Čínská restaurace" (apparently a Czech version of Germany's "Asia Imbiss"). I sat down for a slow lunch of water spinach and tofu and shiitakes and lots of tea. A flurry of Chinese hurried in at 12 on the dot and left almost exactly a half an hour later. I wonder if they were tourists, rushed along on a package tour? The food was great.

I wandered slowly back down to the river, gawking at another statement condo - an odd building with a giant hole in the middle and a tree growing inside the top. Like something out of Miami Vice... or - hey - Deus Ex. In Mankind Divided most of the action was set in and under tight Praguer old-town streets, but this was a location far more worthy of the cyberpunk trappings of the series. A little further along, a Czech TV building, festooned with satellite dishes and aerials. Like everywhere in Prague, security cameras sprouted from every corner. Yeah. Cyberpunk as phuq. 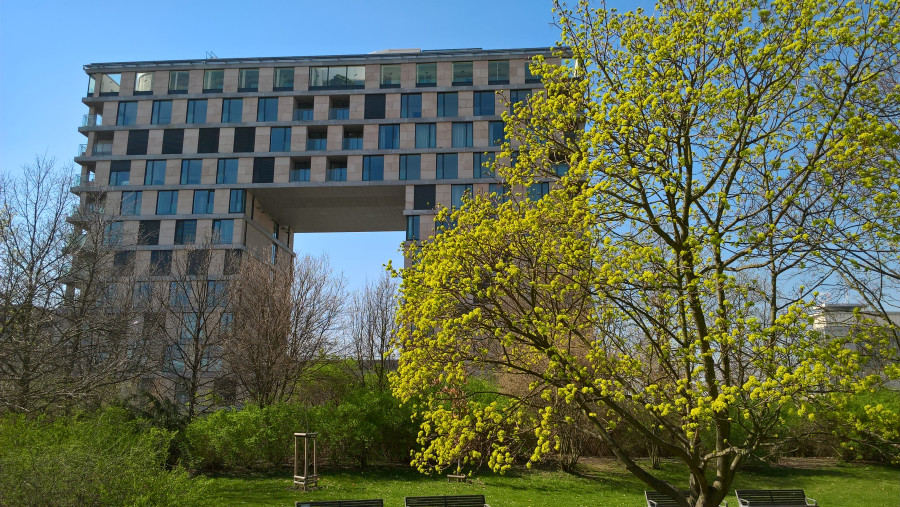 On my way down the hill i ducked between the railings. Some kids had removed one or two of the bars, a secret door to their hideout. It turned out to be a sunny bluff overlooking a swimming pool and the river winding south. I spied a couple sunbathing nude in a hillside clearing, gaggles of children shrieking and splashing - oblivious - just below.

Eventually i made it back down to the river and had a couple of well-deserved beers, nursing my sunburn. The joint was a proper Czech restaurant. Every dish had a pile of meat seemingly higher than the plate was wide. And soup. Everyone ate soup. In the modern world, pretty much every city is indistinguishable. Everyone has shopping malls. Everyone wears jeans. Everyone has smartphones and highways and suburbs and burgers and fries. So it's the little things that stand out. A little thing about Prague? Everyone ordered soup, at every place i ducked in to grab a beer.

The riverside open air market was still buzzing with hipsters and tourists and locals as i made it to the final stretch. I had bought some peanuts there that morning in case of not finding anything good to eat, but i had nothing to worry about. Last night's dinner was a custom stir-fry of garlic, chili and various greens made by an accommodating chef at a Thai restaurant in the tourist district. I skipped Loving Hut when i realized there were Loving Huts all over the damn city. It's convenient to eat at dedicated vegetarian places, but i do find it a bit creepy how many are fronts for gurus. I decided to favor a vegan diet for environmental reasons, not religious ones. Ah well, i guess i give a bunch of money to child-abusing, women-hating Catholics every time i buy a candle for María, so it's not so bad making a guru rich in exchange for a low-carbon feed. No doubt some asshole's gonna get rich any time anyone spends money on anything. I wonder which asshole got rich off my marketplace peanuts? Eh, who cares? They are now sustaining me on the railway to Vienna where i shall rendezvous with my dad, ETA 4pm.

Wi-fi on the train. In the mountains. This is some high-tech business right here. They probably even have cell reception too. Germany could learn a lot from the Czechs. Telecommunications. Soup. Gurus. Botels. I could live here a while.
Collapse