This girl will grow up to be an actress. Every word is enunciated. Every emotion laid bare. Reading from a book, playing rhyming games, hamming up the enjoyment of her Austrian Railways ham sandwich.

My brain is not working so well. I have a throat ache. Don't really like it up here in the mountains. Too many trees. Too claustrophobic. 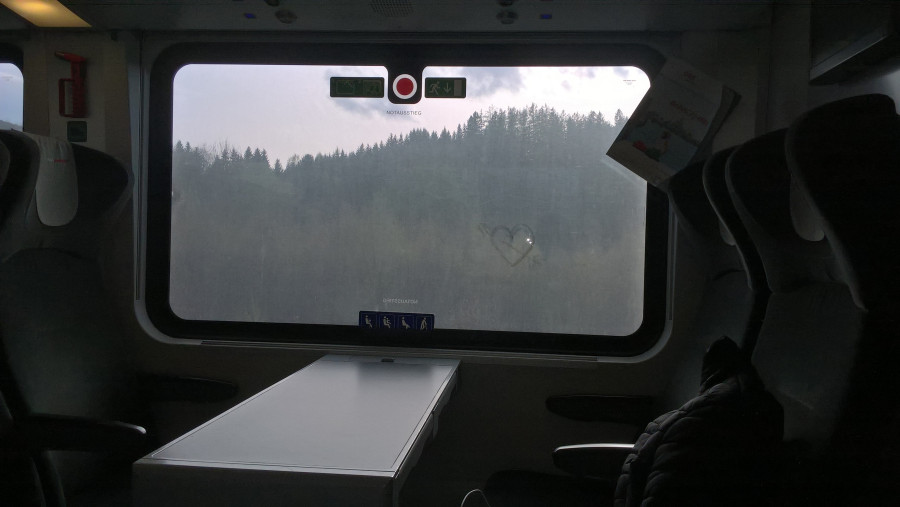 This is what a train should sound like. The pitter-patter of the wheels on steel. An open window and a compartment in faux-wood. Creaking and crawling up the pass between the snow-capped mountains.

And when it pulls away from a station - the music! Like an ambient intro, building...

I have never seen so much neo-nazi graffiti. It's shocking. I thought as i walked in toward the city it might decrease, but here i am in the middle of the tourist area with swastikas and sun crosses and scratched out antifa tags. I know most people i meet here are unlikely to be nationalists, but letting this stuff stay up is chilling.

It's also chilly. This place is up in the mountains... i guess? It was pissing down with rain when i arrived after nightfall. Easter Sunday too, so nothing was open. I made a bee-line for my guest house but, given it's a few km from the station, i arrived sodden. I should probably have marched back to Klub K4 to dance to the Techno Oldies Goldies anyway, but i was zonked. In the daylight turns out this is a charming little town. Tons of trees. It's cold. And wet. But at least the sun is out now.

Weather report says it will be gone by lunch, so i'm getting an early start. I was considering hiking up a mountain that is apparently nearby, but after the rain i'm giving that idea a pass too. I love walks, but i hate muddy forests. Rain should only fall on concrete and neon. The countryside should be dry and barren, like my non-existent womb. Otherwise it just gets dirty and distressing.

Usually graffiti makes me feel safe. It makes a place feel lived-in. It shows the youth aren't oppressed. Maybe some of them are artists. Hopefully they are politically active. To me the amount of graffiti in a town is an indication of its freedom. Here there is a ridiculous amount of graffiti, but the neo-nazi scrawls have left me feeling very unsettled.

I had to sit down to watch some kids playing to regain my faith.

I did stumble across a squatted warehouse that appeared to be a little anarchist commune. I will have to look that up later. And i ate a reasonable Chinese meal. They made me red bean cakes! That was my Easter treat.

Anyway, in general i couldn't shake the neo-nazi imagery that greeted me when i left my guest house this morning. It's colored the whole experience of this city for me, though i know it shouldn't. Is that skinhead a nazi? Is that guy in the black hoodie a nazi? Are those dudes cruising past on their motorcycles nazis?

Are these kids going to grow up to be nazis? They are zooming round and round on BMXes while their moms and dads drink coffee, smoke cigarettes and nurse beers. They all look like nice people. But how can you tell?

Now i am back at my hotel, typing in these notes of the last 24 hours.

I've had a few beers and i am a bit calmer. I did a bit of research on that squat. It's about 10 years old, and of course they are shining happy antifa crusaders. Go team. Turns out a large piece i took a photo of is by Blu, a fairly famous Italian street artist who has work up in a lot of cities all over the world. 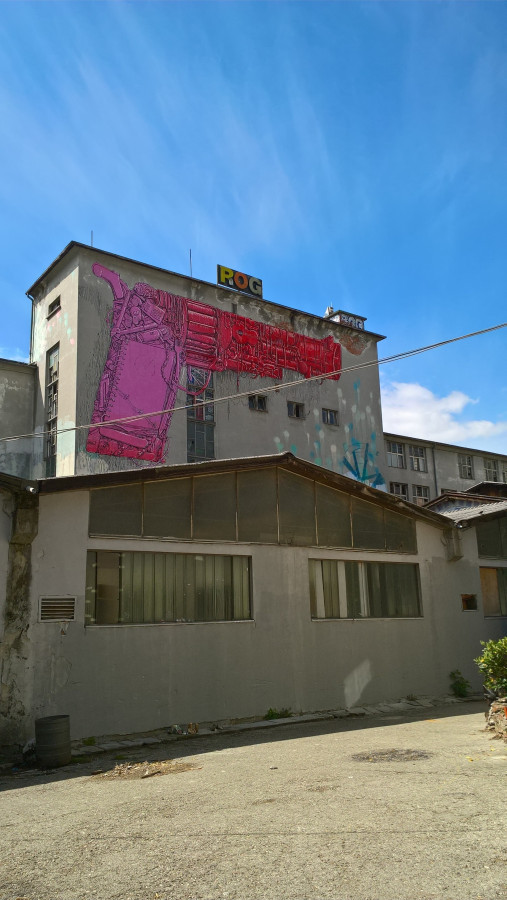 Speaking of blue, i think i am in the midst of first-day blues. Some cities instantly capture me, but most need some time. And when you're passing through, well, you never really understand a place anyway. You just capture some moments and move on. I follow a few blogs of people who dive deep into the places they visit - they are historians, passionate about learning the stories. I guess i am a bit more of a haphazard wanderer - sometimes i wander into something great, sometimes i don't, and that's all i'll ever know. I'm okay with that. Wandering lets me feel free.

So, Ljubljana, how do you make me feel on day one? A little suspicious that you are all a bunch of racists. Which i am quite sure you aren't. But Easter Monday there is not much going on. This is a small town, and today it really feels like one. It's cold. All the trees and the moss and the snails and the damp, depressing, oppressiveness of trees and mountains doesn't make me want to stick around. But there sure is a lot of nice graffiti, if you ignore the swastikas. And the doors are great. I really like the doors here. I also like the Slovenian lady this morning who fussed over my breakfast. When i refused eggs she sliced and put a huge hunk of rye bread on my plate, presumably thinking this sad vegan would surely starve to death eating only an apple and 4 slices of white bread with olive oil. She also gave me a special Easter cake made by her mother - some kind of rolled pastry with tarragon. Wiki makes me think it is štruklji. I guess she got that egg into me after all.

Next to my guest house there is a meadow full of dandelions and one white cock. No pun intended. It's delightfully rural, despite being walking distance from the train station. If i had a bit longer here - and if it was hot and dry - perhaps i would go climb that hill behind the Tivoli gardens. Perhaps i will tomorrow. My bus to Venice only leaves at 11am.

I should probably write more about mountain people vs plains people. And my discomfort in forests. No doubt i will bump into both again over the next few weeks, so there should be plenty of opportunity. Instead, i will leave you with some gender non-binary political graffiti, which warms my cockles to see popping up all over Europe over the past couple years.