I guess some stereotypes have a speck of truth. I am sitting in the bus next to a Slav in a tracksuit and an Italian in a leather jacket. Me, i look like i stumbled out of a trailer park. I am not used to getting mis-gendered for it, though.

Ah, Italia, the moment i got on the bus i was already there. Jovial, well-dressed folks chattering and laughing. I don't think Slovenians laugh. Or chat. Huh.

This morning was cold and wet. I guess i was lucky to catch a little sun yesterday. Now we're crossing some damp hills to Italy. I know all this green keeps our planet habitable, but i'm happy to leave it to the Alpine nuts.

It still surprises me when i cross a border how the houses change. In Europe, border crossings are ancient history, but the building trends remain. Here in Italy they have white-washed homes with red tiled rooves, and they don't have that inexplicable chopped-off corner like in Austria, Czech Republic or Slovenia.

God, the ocean. It still looks cold out there, and it's definitely windy, but it's the ocean.

When i was young i was scared of the sea. In New Zealand i was teased mercilessly - a nerd, a "pom" (Brit), a poor swimmer. I will never forget one weekend at the beach when i was bodysurfing and a wave dumped me hardcore. I didn't know which way was up. I thought i was going to die. The currents terrified me after that. I didn't swim in the sea again for almost 15 years.

But looking out on the ocean does bring peace. It's like the desert. Clean. Pure. Lots of perfect nothing.

That little Italian girl just gave me un dolce. Chocolate money, the universal candy. I wonder when they switched from the chocolate Lire to the chocolate Euros? There's something comforting about kids all over Europe eating the same currency. I can't decide if it's capitalist or anti-capitalist. Anyway. Chocolate.

I wish i knew a little more Italian. Everyone is so animated. They're like Americans. 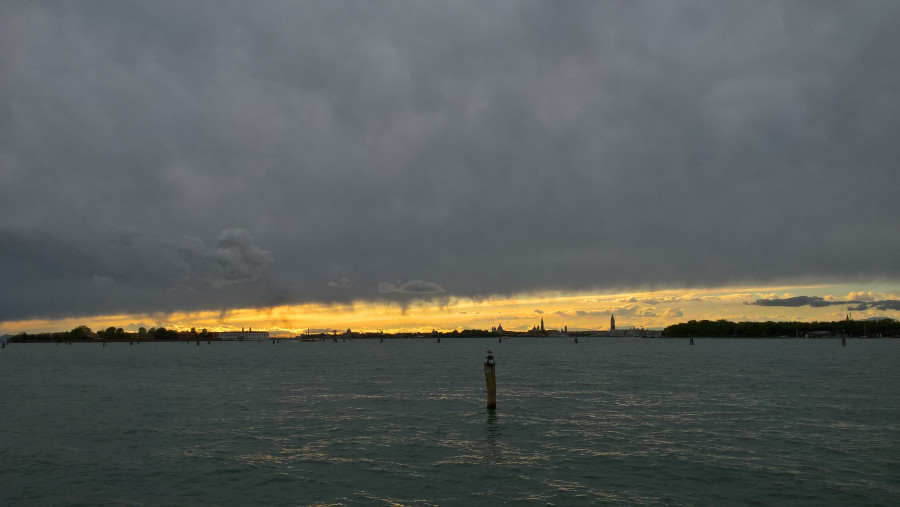 Spaghetti aglio olio e peperoncini. Aside from pizza marinara it's the only vegan-ish thing on the menu.

Sitting alone on the Lido drinking my half liter of rosé, bitch.

It's the only affordable way to drink here. God knows what the affordable way to eat is. That small plate of pasta was 8€. I will definitely need to supplement this nonsense with some fruit or nuts. Fortunately there are plenty of fruit shops, and a grocery store around the corner.

Bloody awful. Breakfast. The coffee is 3/4 froth. It's a fucking black coffee, for God's sake. The Italians invented espresso, how can you mess up black coffee?

Nothing for breakfast. Some canned fruit and dry bread. No olive oil. No margarine. No nothing. Just butter and meat. Fuck Venice.

Well, don't fuck it too hard. Last night i had a very long and hilarious drunken chat with one of those charming Med Men. You know, the guys who hang out at bars on the Med - locals - looking to pick up tourists on their holiday fling. Great sources of conversation and (often) free drinks.

He worked at a hotel. Made some mistakes in his life. Getting anything out of him was like trying to find coffee in this godawful cup of foam. He did the typical pick-up artist/con man technique of turning every question back on you, and trying to answer every question with your own words. It must drive people like that nuts when i don't have a simple answer to "where are you from?"

Anywho, i have a feeling there was some truth to the story that he was divorced with several kids, and that although he was born here he grew up elsewhere. There was some regret, or sadness there. He loved his nonna. "A pure love." I spoke to him about how important it is for me to respect other people's lives and choices and he kept coming back to that all night. I felt like i was in a mafia movie, with this Tony Bourdain looking guy buying me drinks and talking to me about rispetto.

I'm not sure where he was really from. The only place in Italy he told me to visit was Venaria Reale, a small town near Torino. I am going to assume it meant something to him. Turin would be interesting to visit because the mayor recently declared it a vegetarian city, but sadly it is not on my way.

In the past i have followed whimsical suggestions from drunken strangers. For example, visiting Battle Mountain, Nevada on the advice of a trucker in Cheyenne, Wyoming. That was a pretty damn fine chicken-fried steak.

Oh yeah. I have a blistering hangover. The absolute worst. And last night i smashed my phone, so i also have no camera and no map. You all will have to enjoy Venice through the power of my prose. I will enjoy it with a headache and an empty stomach, once the whole place stops spinning.

Perhaps it's just because i have a hangover, but holy hell the main islands of Venice are a bore. When you take a boat past the outside it looks spectacular, but when you start ducking down alleys it's just Yet Another European Oldtown. Shuffling hordes. Big-name stores. Overpriced restaurants. And pointless knick-knacks galore.

I am on a train to Mestre (the mainland) because there is nowhere to buy a clean phone here. I guess it's not worth it to ship Windows phones over when only the nerdliest nerds buy them these days.

Here's a thing i never knew about Venice. It's a handful of islands in the middle of a lagoon. So all those canals are seawater. And up until ~150 years ago literally everything had to be shipped over by boat. Knowing that makes all the ornate masonry even more ridiculous. For some reason i always thought the city was just a regular town on a river somewhere. The guys who built this stuff must have been hideously rich.

And now it's Disneyland Italy.

Mestre is great. It has such a seedy 70s holiday town feel to it. Most of the shops are closed. I don't know if that's a "thing" in Italy, like siesta in Spain, or if it's just really economically busted down here. No doubt malls have bitten out a chunk. But a mall is exactly what i need right now.

I'm at a restaurant that lured me in with a sign saying "vegan burger". I'm drinking a fresh fruit smoothie to soothe my hangover. The burger patty is some kind of homemade vegetable croquette, fat and oily and delicious. Solid.

So here is something great. Mestre. But i'll get back to that. What is great is discovering that there is a bus that goes straight from the Venice islands across the causeway and all the way to this exact shopping mall. It took me several hours to walk here from the Mestre train station. When people said to get lost in Venice this probably wasn't what they had in mind. I tried to follow a (circuitous) bus route, but without a map and no understanding of the language i zigged and zagged all over the place.

But what a walk! Mestre is much more than the shabby hotels, Chinese groceries and halal chicken joints near the train station. I walked through a delightful little oldtown, along tree-lined streets and highrises, and past some epic mansions. Army barracks, meadows and parks. So much to see, and space to enjoy it.

Everyone seemed chill, unlike on the main islands. Each shop had its own character. The hardware store. The hair salon. The fruit shop. The bar. The tobacconist. People squatting on the sidewalk puffing their smokes. Young parents ducking in for an Aperol spritz. Teenagers kicking about with nothing to do. Normal, everyday people. People dressed like me. People just living their lives. If i'd taken the bus, i would have missed it all.

I had many photo opportunities. Without crowds blocking the view, every building and wall caught my eye. Sadly no phone does not just mean no map and no phrasebook, it also means no camera. You'll have to trust me when i say it was lovely. Such a stark contrast to the depressing genericness of the main islands, and the upscale - if a little sleepy - vibe of the Lido.

Driving back along the freeway it's remarkable how a mall can turn a whole neighborhood pedestrian-hostile. The walk to the mall was largely pleasant - little alleyways and streets with separated sidewalks, bike lanes, trees and so on. Small businesses dotted everywhere. But the last mile or so was like something out of nightmare. Or, you know, the United States of America. The signposting was dire, and i couldn't follow the bus stops any more because it went onto the freeway. I ended up walking completely out of Mestre altogether and spying a billboard advertizing the mall from the other side of the freeway, so i crossed back only to get trapped in one of those appalling suburban cul-de-sacs that is right fucking next to where you want to be but the roads are built in such a way you have to walk all the way round in a circle to get there. By the time i finally got to the mall i almost wanted to fall to my knees and touch the left foot of a mannequin.

I had some beer and chips after picking up a replacement phone. It was great. Coffee, 1€. Vegan burger and smoothie, 12€. Beer and chips, 3€. Mestre is the fucking bomb and don't let anyone tell you different.