Sometimes my work can be so infuriating. I cannot believe that my manager asked the Filipino guys to come into the office today, despite it being a holiday in Philippines, to try push out the release tomorrow. Friday we already had 10+ complex bugs open and it was clear that regardless of whether people pulled OT we weren't going to hit the release date. I told her this on Friday morning. I told her again this morning. And at lunch time. Then at 5pm she acted all surprised that there were still 10+ bugs open. Software engineering isn't rocket science, sure, but it's still more complicated than just "press a button, fix the bug". For someone who has worked in the industry as long as she has, she should know better. I am so upset she forced those kids to work on a holiday for nothing. Plus, i'm fucking sick too and should have spent the day at home in bed.

Whatever, i don't want to waste energy worrying about it. It will still be shit tomorrow. Instead i will write about bikes.

Sunday i was sick as a dog, but i made myself go outside for a bit. I decided to take a bike and head up to a mysterious large green patch on my map that i know is a mountain because i have been in the area before, but i could never find an access road or path. According to my map, there is a solitary road heading into a place called 银湖山郊野公园 (hú shān jiāo yě gōng yuán) - Silver Lake Mountain Countryside Park. Sounds good, right? I went to explore.

That part of town is close to the railway lines and the "border" between Luohu District and Longgang District. It's actually fairly close to my house too, but because of the freeway and railway lines and old industrial areas, it's a bit tricky to get to. I zigged and zagged and slipped between two buildings to coast into a tunnel below the railway lines. There was a hidden wet market down there, so i cycled through the slop and the gore, hauled ass the wrong way up an off-ramp, then popped out in a Tokyo-looking multi-layered intersection with greenways and pedestrian bridges and the works.

Then my sidewalk suddenly ended. Ah, China. I hauled the bike up a steep set of stairs and then followed the road my map showed winding up into the mountain toward the park. There were no cars, no bikes, no pedestrians, no nothing. It was very weird. It was a tough cycle, too. I pushed hard and - covered in sweat - paused at a weird industrial compound with a security guard out front. He looked me and yelled "not far!" I asked him if there was a park up there and he said no. He tried to explain what was there and the main word i got was 垃圾 (lā jī), which means trash. I said "no park, really?" and frowned. He shrugged and told me again it wasn't far so i might as well head up there. I got his point and left him saying at least i'll enjoy zooming back down.

The next few hundred meters the air was thick with construction muck and mist. A whole army of guys was hanging off the side of the cliff putting in landslide protection and cutting waterways.

Just then a garbage truck rolled past.

Up near the top of the hill was another security checkpoint, and this time the guards were less cheerful. They told me i couldn't go through. The garbage truck and some guy with his girlfriend and a pickup full of trash were lined up. I guess it's a landfill. Unmarked on the map. No road signs. You just have to know.

So i quaffed some water and zipped back down the hill, waving hi to the bemused construction workers and friendly security guard as i passed.

Then i decided to peel off to the left. There was a steep dirt road going down into a gully, and i had just seen a guy come up it on his electric trike. On my map in the middle of the green i could also see a slice of blue pie - a very small reservoir. Halfway down the dirt road, i realized i was heading into a hole that looked like it wasn't going to be easy to bike out of. I looped around and pushed my trusty steed back up the hill then hair-pinned it onto an even smaller and steeper path - just about a foot wide - and literally slid down to the edge of the freeway where there was a sidewalk connected to nothing except for the dirt path i just came from.

I cycled over the bridge and paused in the middle. Down in the valley was a dam and some people tilling crops in the flood plain. The sun shone right in my eyes. A cock crowed.

On the other side of the bridge, the sidewalk ended again. I BMXed onto another dirt track that led through some trees to the next proper road turn-off.

Well. A "proper" road that was not marked on my map at all. I decided to follow it. At some point i found one of those temporary villages that pop up in construction areas here - lots of prefab homes and bright orange jumpsuits hanging up out front. I asked a woman who was chilling in a bizarrely-located children's playground where i could go to climb the mountain. She pointed back at a fork i had passed earlier. Since it was a decent-sized concrete road, i figured it would lead up to an official park entrance where i could leave my bike and proceed on foot.

That didn't happen. I pedaled up that mountain like it was the motherfucking Tour de France. At a certain point i rounded a turn and spyed a whole goddamn sky village being constructed on top of the mountain. Like a fucking major resort or something. This was slap-bang in the middle of the blank green expanse on my map. No roads, no landmarks, no nothing. I guess the development is so brand new that it hasn't even hit the local online maps yet. The only people i saw were construction workers heading up to the site, and one or two older locals walking up as part of their workout.

This site was far enough out of the way they didn't have a security guard. I've been to a few smaller mountain-top construction sites where there are lots of signs telling you not to go, but the construction workers don't give a shit as long as you stay out of their way. If i didn't have the bike with me or if i was a little less sick i might have tried my luck here to see if there was a hidden hiking trail, but once i got to an area where a couple of concrete mixers were dumping their slurry by the side of the road i decided to head back to somewhere i wouldn't be breathing in construction dust for the rest of the evening. 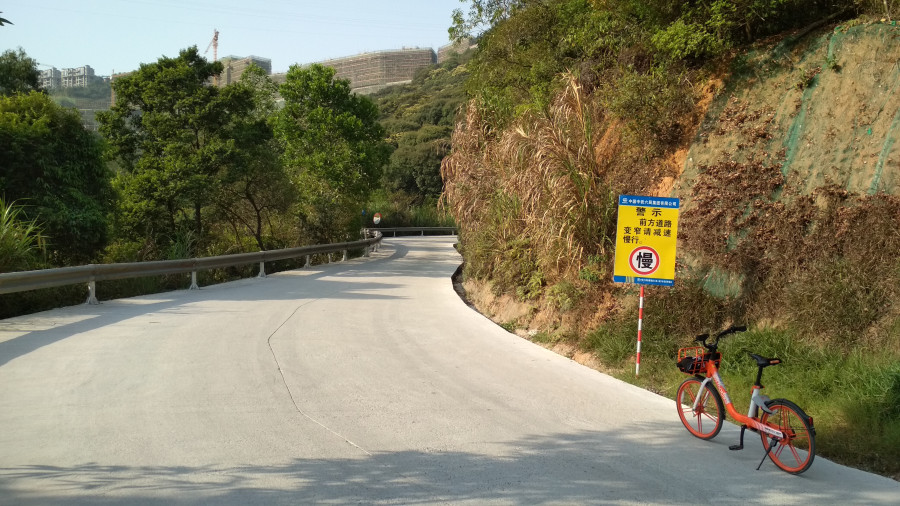 The best thing about these share bikes is how much they capture the sense of being a child again. A lot of them are pretty busted up, sometimes you gotta brake with your feet, and all of them are designed for people well under 6 foot. They have no gears. They have solid (puncture-proof) tires, so it's a very bumpy ride. "Serious" cyclists complain that they are too heavy and poorly maintained. Serious cyclists totally miss the point. Because the bikes are so tough, people take them everywhere. They're a big hit with construction workers and other poor people who otherwise would have to walk. It might sound odd that i am BMXing around in the middle of a city of 10 million people, but that's what the city is like when you get outside the glitz and glamor of the middle class areas. In the industrial areas and the rural/developing areas, the sidewalks are bumpy, there are random holes in the ground... it's a shit-show. Sometimes you're going to have to take a dirt path or climb over a fence to get to where you're going. Hey, it's no biggie, the cops do it too.

But all of that makes me feel like a youngster again. I don't know if this was the experience of every kid in the world, but in my generation and in the places where i lived, we would get on our bikes and tear off down the sidewalk - no helmets - ride up hills and into parks and find abandoned construction sites where we could pretend we were motocross heroes or just jump around in the dirt. We never had a destination in mind, we'd just hide and trespass and climb trees and imagine far more exciting lives for ourselves than being average kids going to an average school in an average town.

Getting on my share bike in Shenzhen and heading away from the greenways and shopping malls, that's when i really feel like a kid again.

After my little adventure in developing Shenzhen, i headed back down to 洪湖公园 (hóng hú gōng yuán) or Flood Lake Park. That's the park close to my apartment that first time i visited made me feel like this area would be a good place to rent. Funnily, since i moved in i've never been there. I guess it's not really on the way to anywhere. There were people singing karaoke and people fishing and people taking photos of birds and all the fabulous 热闹 (rè nao) that makes urban parks in China great. I took some photos of graffiti, since this is one of the very few parts of town where they don't paint over it immediately. And then i sat down under some palm trees to watch the sunset. Side note: palm trees are the most useless fucking trees in the world when you live in a hot place. They don't provide any shade at all. The Shenzhen city planners know this and have instead lined most of the streets with some kind of umbrella-like tree that has very thick coverage and is a blessing in the summer. But - not gonna lie - there's something magical about palm trees that instantly makes you feel like you're on holiday.

For a moment, this Sunday night, i felt like i was on holiday again. 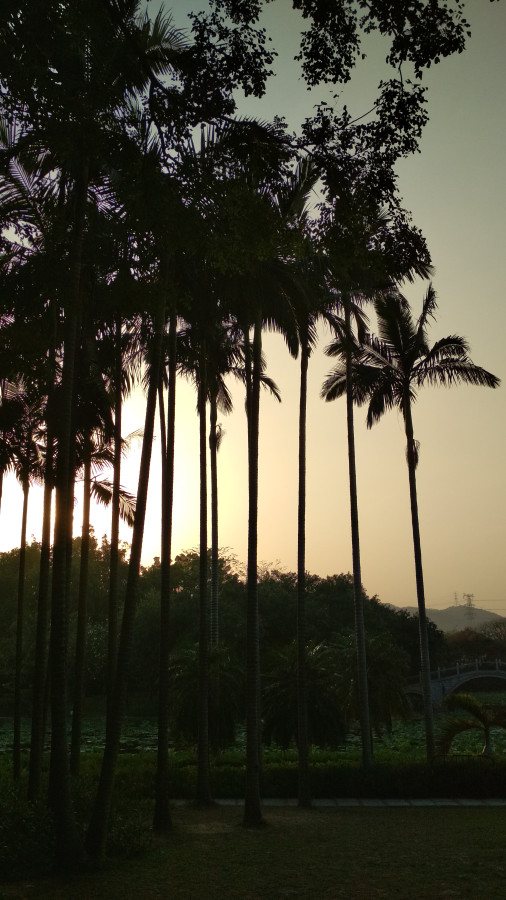