It might not seem like it from my LJ, but i am a very uncommunicative person, especially when i am working. Work sucks up so much of my energy, the last thing i want to do in the tiny amounts of free time that i do have is spend it on other people.

I got a reminder of that when dad sent me an email this week. I scrolled back through my sent mail folder and realized the last time i wrote him was December last year. The last time i wrote mom was April. I don't even know how to contact my sister or other family members, I haven't spoken to most of them in years. Since i left Germany i haven't contacted any of my friends there. I've lost touch with all but one friend in Canada. I just don't have energy for it.

It's so exhausting to be forced to keep in touch. It's exhausting to keep in touch with anybody, but family is the worst because you can't just ignore it. At least with friends, if they don't hear from you for months or years, then whatever. If they're still friends in the end then cool, and if they're not, also cool. But with family there is this cultural obligation to interact with some kind of frequency, so i always feel a bit guilty when i don't.

It struck me how unusual i am again this week when some guys at work angled to add me on WeChat and i threw them for a loop by saying i could add them but i'm not sure if it'd be worth it because i never check it. On Friday my boss also brought up WeChat, saying he would like to add me to the emergency/after hours group. Now, i don't mind being on call if that's part of the job, but fuck if i'm going to be on call on my personal phone. I explained that on my personal phone, i never pick up. I get messages and literally do not read them for weeks. I just swipe the notification away and forget about it. Occasionally, when i feel like i have the mental space, that's when i check.

Obviously, that doesn't make sense for work. I explained that if they want me to be on call, just get me a work phone, then i will know that everything that comes on that phone is urgent. I don't want my personal phone to sometimes be urgent and sometimes not. That will completely wreck my personal life, a huge part of which is about not giving any shits whatsoever. The instant i feel pressured into doing something in my personal life, i get stressed out and frustrated and resentful.

This is why i will never be in a relationship again and i am so very happy to be single.

However, because on Friday i opened WeChat to make a point to my boss that i never open WeChat, it was running in the background on my phone. Usually it's closed and not running in the background, so i don't get any message notifications at all. But Friday after work i was sitting at a bar having a few drinks and i got a notification from the one work guy i have added. Since i was already a bit drunk i agreed to meet up, even though if i was sober i would have said no because one of the other guys in the group was the "it's a man's duty to tell women what to wear so they don't get raped" guy.

We ended up heading out for BBQ, had a whole bunch of drinks, and then i hit that level of Berlin drunk where i wanted to party all night. One reason i should never go out with these asshats is their idea of party all night is go to someone's house and drink whisky or cognac or something. Fuck off. If it's at someone's house, it will never be a party in my books. People's houses are just awkward and uncomfortable places full of obligation and everything i hate. So i left to find another bar. That really upset one of them, and that's ... ugh it drives me nuts when you already spent several hours drinking with people and then they feel like you owe them the rest of the fucking night. Like, no. You go out, you drink, if someone else happens to be there that you know, bonus, if not, fine. I don't understand people who don't want the people around them to be free.

Anyway, i eventually found another bar that i'm not sure if it was a gay bar or not. Almost everyone there was a guy, but that's not saying much because drinking heavily is more of a guy thing in China. They had lots of different beers from around the world and they played techno music and gymnastics was on the TVs. The beer was very, very expensive. But i guess that's how it is. No working class bars, period. I chattered with a bunch of other very drunk people before flopping off home near dawn. I was such a wreck i stacked it a few times and am now sporting several more bloodied up and bruised limbs. Good times.

Yesterday was a write-off. Unfortunately i had no food in the house, so after a reasonable breakfast i cooked the only thing i had left for dinner - Job's tears. Yes, it's actually called Job's tears - check the wiki. In Chinese it's 小薏米 (xiǎo yì mǐ). I bought some the other day because i didn't know what it was and thought i'd experiment with it. It's some kind of grain. Last week i made a porridge out of it, just sitting there bubbling away in the wok for almost an hour to get it to soften up. Yesterday i did it again. It's a pretty good hangover food. Not too much flavor but it goes down easy and coats your stomach good.

This morning i really had to hunt through the dregs for breakfast. In the fridge i still had some Korean rice cakes from my little Korean food buying mission of a few weeks back. For those who haven't had them before - they are little squares of glutinous rice, about the size of dominos. The Koreans toss them into hotpot. I got the wok fired up to roast peanuts before adding garlic, ginger, fennel and cumin. Then i scraped out the last of my doubanjiang to add some heat. Plenty of water. And these new pickles i found the other day called 萝卜干 (luó bo gān). It's something like pickled radish or turnip or something. It is incredibly spicy and delicious. Then i splashed in just a little bit of vinegar and soy, and added some of those 山楂条 sweet hawthorn candies. And then, the Korean rice cakes. I had no idea what to expect, but it bubbled furiously before thickening up. In under 10 minutes it turned into something like American/Canadian Chinese hot and sour soup. A roaring success.

I burned my tongue.

But now i need to go buy real food. I want to play the last episode of Life is Strange: Before the Storm today, so i will probably need some crying food like fruit jellies and pineapple beer. Maybe a sweetened version of Job's tears would fit the bill, but i don't want to spend another hour standing by the wok watching it cook. I also kinda want to go out exploring, but since i pulled a shoulder muscle doing something drunk that i don't remember i should probably just chill.

Fucking, tomorrow is work again. I am already dreading it and it's not even lunch time. The weekend is never enough.

(Note to friends who may see this twice: this is a draft for my post in 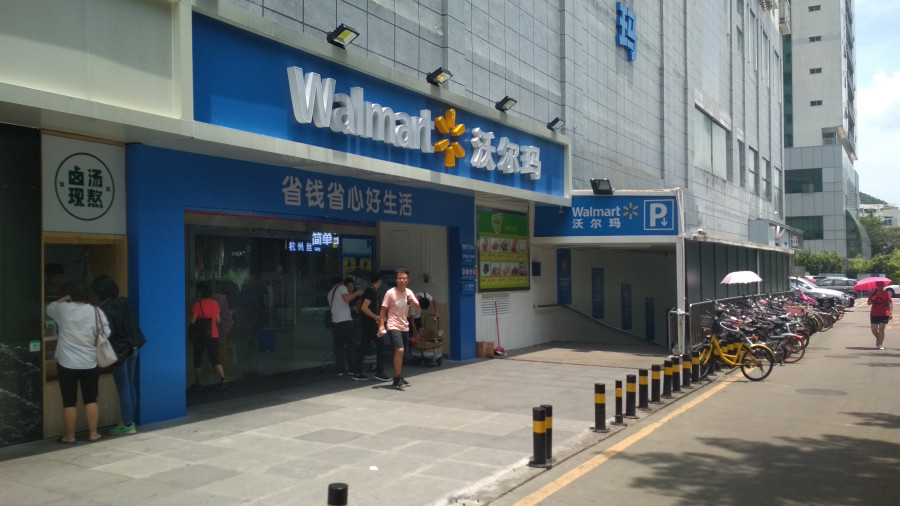 Since there is a Walmart literally on the same block as my building, I don't tend to do big grocery shops - I stop by every couple of days after work to restock. That said, I have learned that the best time to go shopping here is around noon, when everyone else is at home eating lunch. You don't get the freshest pick of the morning's vegetables, but they're usually less wilted than the after work hauls, so I normally look forward to my weekend shop.