This was the greatest beer of my life. Actually, being an alcoholic, i admit i have the greatest beer of my life at least several times a week. But this was undoubtedly a well-deserved one. And it tastes all the better in retrospect now knowing i will never have it again.

Let's rewind. Sunday morning i was up and cooking breakfast bright and early. I've been a bit sick the last week (more on that in a future post), but when i finished my food and my coffee and had showered and watched a couple episodes of Lucha Underground and it was still before noon i figured i should do something more with my day. Of course it took another hour or so from the moment of decision to actually get out the door, but such is my sloth.

On the map i spied a lake way out in the north-east that i wanted to go to. The route there was the road along the Shenzhen reservoir and up to Dawang village, which is a route i have quite enjoyed wandering since i moved to this side of town. I found myself a share bike with a decent set of brakes and headed on the way. I knew from the last time i BMXed out the back of Dawang village i'd be able to cut across a construction site under the freeway and head the wrong way up an offramp to pop back out on a road heading north-east. This time i didn't see people in cowboy hats riding horses, but i did pass by several sketchy looking cars with couples canoodling or doing drugs or perhaps just learning how to drive. 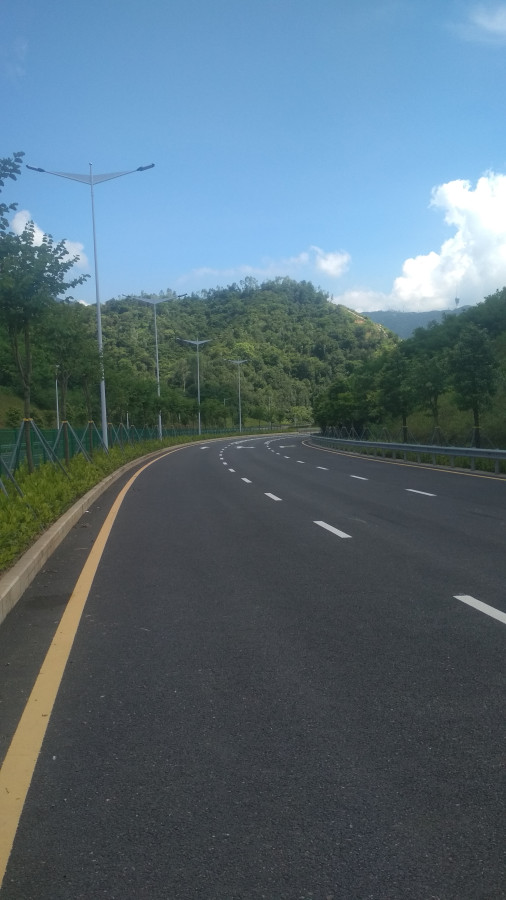 I really love these little places in between. They're not really country and not really city, just sort of a limbo where nobody lives yet. The roads are mostly brand new, but they don't go anywhere and are usually blocked off anyway, so you get this weird zombie feeling. Here and there you get a glimpse of what i consider to be the quintessential image of modern China. Back of a factory, creek of dubious water quality, empty high-rises, big ol' pile of containers. All that was missing was a water buffalo. Hiding in the bush, no doubt. 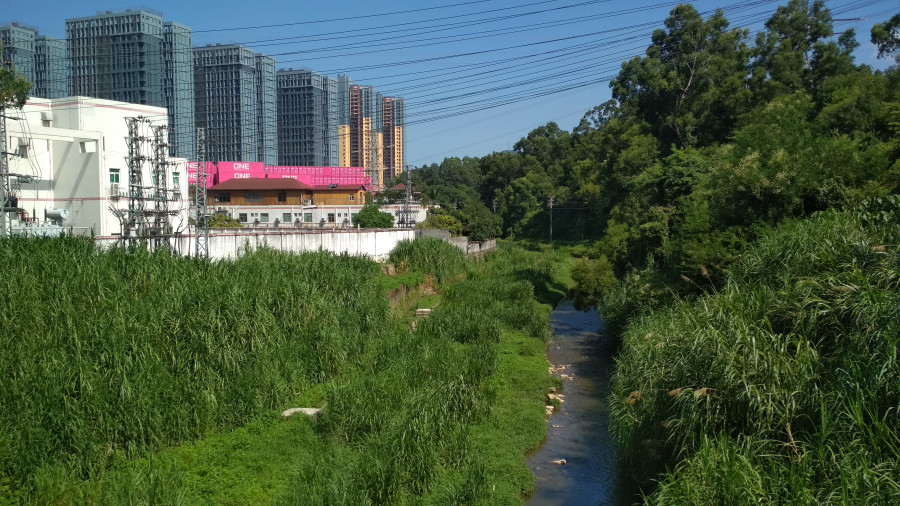 Checking the map i realized i could continue north-east or loop back around the mountain to the beach. Since i'd been biking for about an hour at this point i got the idea in my head that it would be awesome to kick back on the beach and paddle my feet in the South China Sea.

See, Shenzhen is technically a seaside town. The unfortunate thing is that the Brits nabbed pretty much all of the best seaside and called it Hong Kong, but we still have a little bit down here. Sure, to the north is Dongguan and the rest of the industrial PRD cities. Out west is the wide and dirty Pearl River. That has its own charm, at sunset. But on a little tiny strip way out east - across the Wutong mountain - Shenzhen has proper beaches. Admittedly, most people who live here rarely go. The logistics are a pain in the ass.

But my phone said i was only about 1.5 hours away, and that felt totally doable. I started out alongside the freeway, amidst the din of internal combustion engines, breathing dust and fumes. I stopped at a gas station to get some sweet tea, then pushed on. For all of 50 meters. At which point the "cycle path" (read: narrow paved area behind the guard rail) disappeared. I don't mind BMXing a little bit, but this transition made it clear: either you're a car, or get the fuck off the freeway.

Fortunately my map showed some frontage roads that looked like they'd still get me through, so i ducked down into a mountain village slash industrial area and pedaled my little heart out. There were several of those typically Chinese checkpoints where it looks like you're not allowed through because there is a security post and a boom gate, but actually the checkpoint is there for no reason whatsoever. There's no guard, just some shirtless guys smoking and drinking and playing cards, and they hoot and holler and wave while the ladyfolk collect ong choy from a nearby creek. 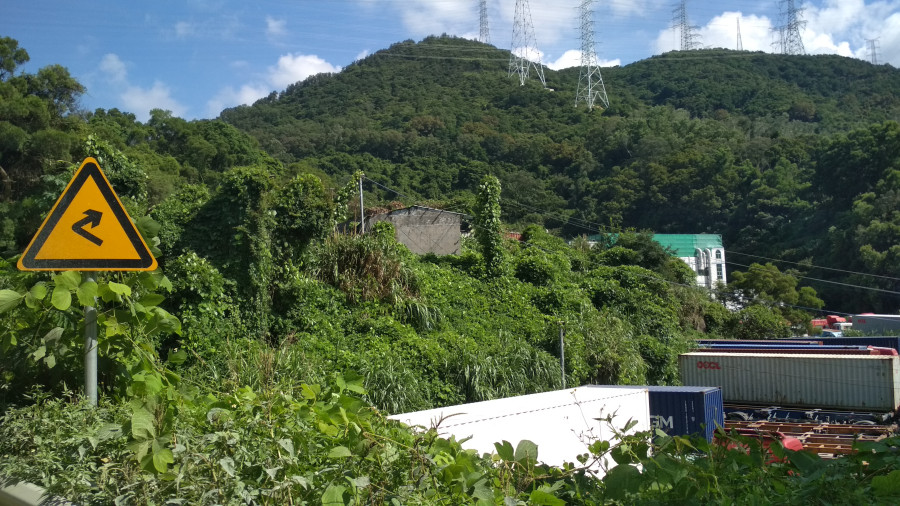 I guess i should've checked the map a little closer, because although my small road seemed to follow the highway, what actually happened was the highway went into a tunnel, and this was a steep ass switch-backed fucking mountain trail. There were a few cars heading up there, and a couple of hardcore mountain bikers, but mostly it was just people hiking. At this point i'd gone so far with my trusty steed i figured i couldn't just leave it there, so i dragged it up the damn hill with me.

Needless to say, that was a slog. 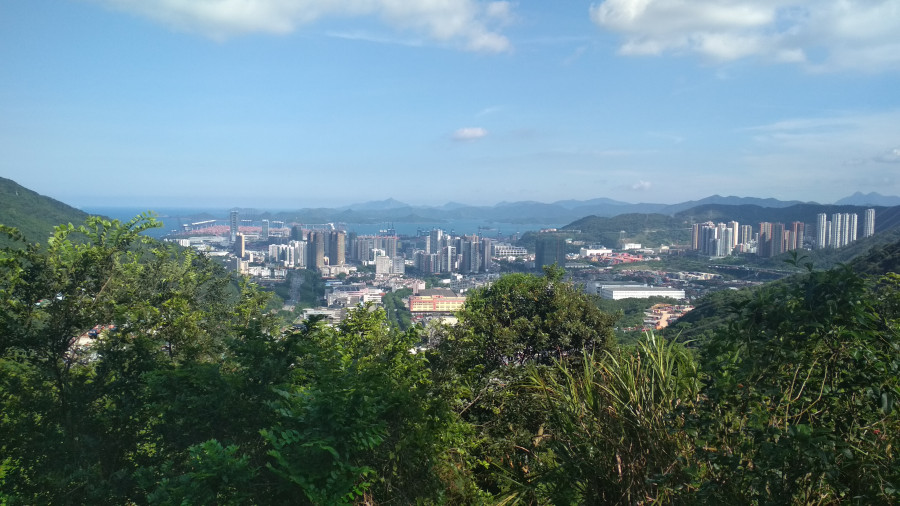 Zooming down the other side was epic. I zigged and zagged and crossed a little railway that i am sure has a story, but my water bottle was empty and i wanted to see the sea. I popped back out onto the wrong side of the freeway and pedaled against traffic for a short while before a bike path appeared and i could continue in relative safety. Heading into Yantian District proper, things got back to the regular urban feel. And then i popped out at the docks. And there starts a greenway where you can bike all the way along the coast.

I stopped for a bit to get some 凉粉 (grass jelly) from a street vendor. She seemed like a reasonably young girl, very happy to see a foreigner come by. We chatted a bit, then she got her 小朋友, which literally means little friend, but i suspect it was a nephew or maybe even her own son, to take a photo. They took some videos too. No doubt i am a now a hit on one of the short video websites - the sweaty red foreigner who biked over the mountain and says she's a girl but sounds like a boy. The kid was shy as hell. I hope i don't traumatize them. Parents often present their kids to say hello and get a photo with the foreigner, even when the kids are desperately embarrassed about the whole thing.

After the pit-stop i headed on to 大梅沙 which is the Big Plum Beach. I have been there once before - for a group run/sports thing last year - and i didn't really enjoy it because i was in a group and didn't have any freedom. But i also didn't enjoy it because you have to pay to get on the beach, and then when you go through the turnstiles you are just stuck on a tiny strip of sand with about a million people. So i headed on to 小梅沙, the Little Plum Beach. Turns out, that was just as bad.

On the other hand, down at 小梅沙 it had a bit more of that seedy resort town feeling - one long strip of storefronts all open to the road, all selling the exact same sunglasses and hats and floaters. Lots of plastic stools and people in flip-flops and fish and chip shops that sold Chinese food instead of fish and chips. I think i would've liked to hang there a while, but i was sunburnt and exhausted and desperate for my beer and paddle.

I asked one of the cops if i could buy beer on the beach, but he said i needed to stock up before going in. Of course just one can plus some water and sweet ice tea cost over 25 kuai. Beach prices, man. But entry to the beach cost 50 kuai! So fuck that noise. Biking over I had noticed a boardwalk where some intrepid fishermen had jumped the barrier, so i locked up my bike and headed back on foot.

And that's where i found a nice flat rock to sit on and drink my beer. I never did paddle my feet, but i tell you what. Just looking out at the South China Sea after a 4+ hour summer bike ride was bliss. 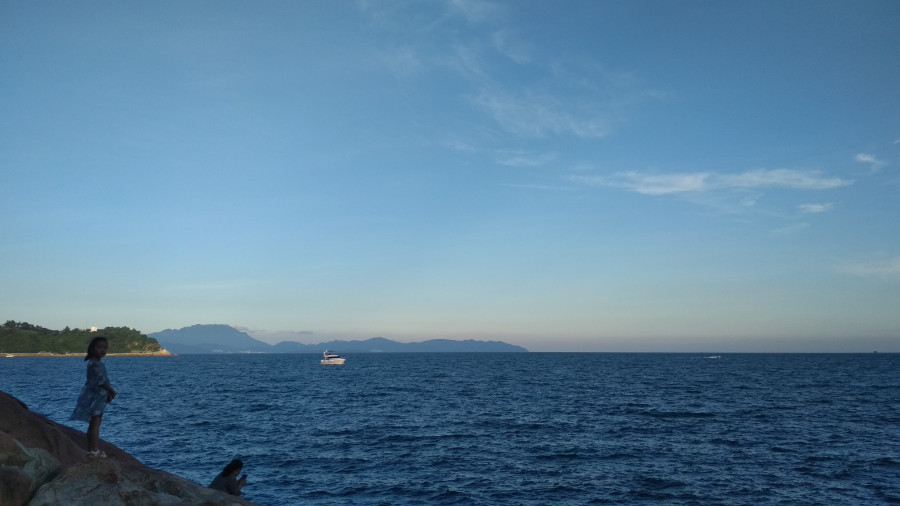 The story should end here, but it doesn't. By the time i started walking back to the fancy hotels and clothing stores up at 大梅沙, the sun was dipping behind the ridge. 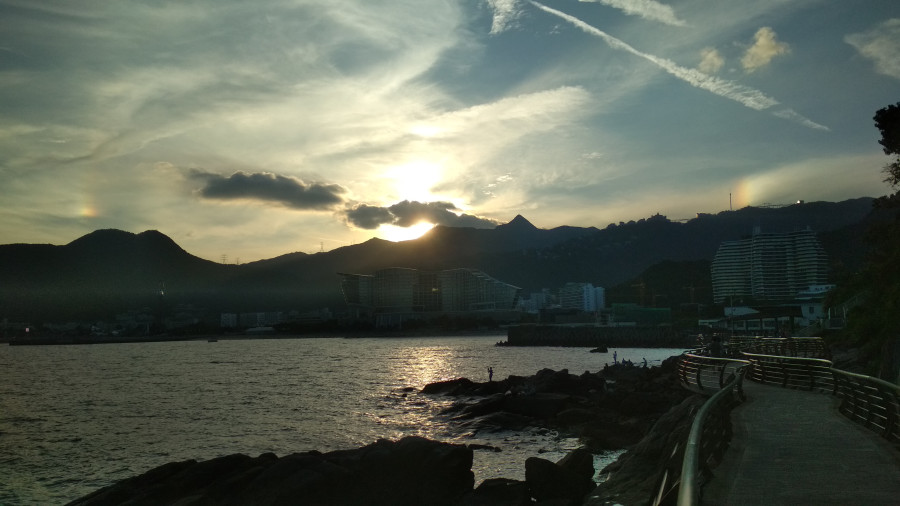 Oh, shit. Now i remember why no one in Shenzhen comes here. The streets were chaos. Gridlock. I picked up some tofu and waited for the bus. And waited, and waited, and waited. After 45 minutes of waiting and seeing dozens of buses, none of which were mine, i crossed the road to wait for a different bus. But the jam was intense. Every bus that came by was already packed, and not even the smallest person could squeeze in. So i walked back several stops, and eventually managed to squish myself onto a 103 back to Luohu District. The traffic was stop-start all the way. 3 hours after i left my idyllic rock, i arrived back by the green bamboo hill near my house all poked and prodded and bent and spent.

I flipped open my phone to jump on another share bike... Only to find that i had broken the rules of Mobike. Apparently even though Yantian District is still Shenzhen City, it's not part of my Mobike area. I can ride almost all the way to Dongguan - 10, 20, 30, 40km out west - but if i go over the hill out back of my house and pop out at the beach? No way José. I was told this was my first and only warning. Next time i have to foot the bill to have the bike retrieved. Never mind the fact there were several other Mobikes over there. Never mind the fact that encouraging people to pedal their asses over the mountain to get home might help alleviate a little bit of the insane traffic. Rules are rules, and now i will never get to take that trip again.

At least, not on two wheels. 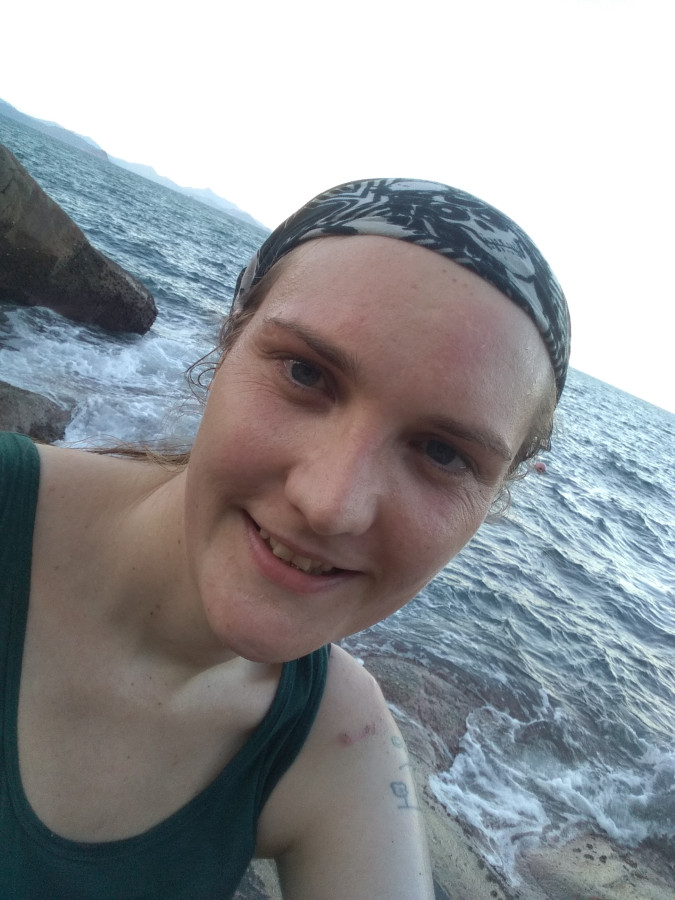