The boat ride to Weizhou was uneventful. I checked my map when i got to the island and saw it was about 5km to my hotel, so i skipped the touts in tuk tuks and golf carts and decided to walk. I had about an hour before sunset and figured it'd be okay.

What i didn't realize, when i saw that the island was about 5km in diameter, was that inside that small space are a dozen rural villages. The whole island is a national park, but it's still a place where people live and work. Okay, fine. Rural villages means never being more than a stone's throw from civilization. Cool, right?

Wrong. Fucking small-hold farming means chickens and dogs and water buffalo wander free. I am a city kid. I am fucking terrified of chickens and dogs and water buffalo. Snakes, scorpions, geckos, i don't give a shit. You live them alone, they'll leave you alone. Rats, possums, cockroaches? Whatever, they only come out at night and only want your trash anyways. But farm animals just stand there in the middle of the road staring at you, daring you to walk past. They're slaves, and every human that walks past is the face of their oppression. I don't trust farm animals one bit. 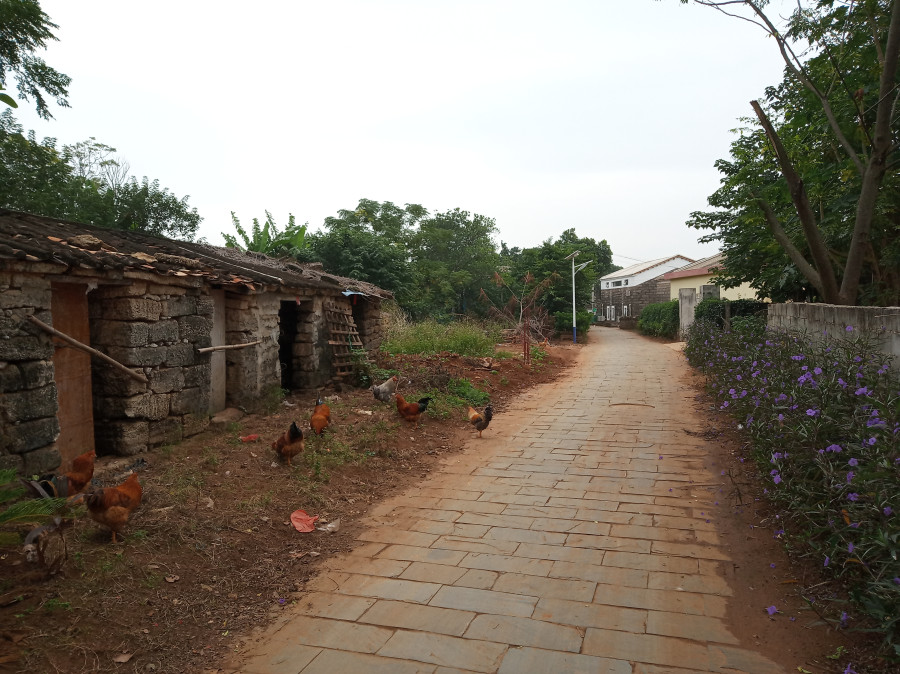 But, i made it, yanno. It was dark by the time i popped out at a little fish market on the south side of the island. There was lots of commotion and excitement and people were happy to point me to my hotel.

It was the wrong fucking hotel. On Booking.com I had seen the English name something-something summer hotel, and on my Chinese map i only found one hotel with the character 夏 (summer), and the photos looked the same... but it was not the same.

After some exasperated discussion with the owner of the wrong hotel, i called the contact number of the hotel i had booked. In hindsight i now think it was never a real hotel. The room photos seemed cribbed, and the address was non-existent. The owner was in Beihai, and his wife - Y - was at her other job which i still don't know what it was.

I had to take a fucking tuk tuk literally all the way back to where i started. And then squat in the dark watching some kids play basketball until Y arrived, led me through some back alleys and had me sit in the lobby with another guest while she cleaned a room.

Now, i think if i hadn't been to Croatia during the off-season with my dad a few years back, i would have broken down completely. I was in a hotel right on the other side of the island from where i wanted to be, with only one other guest in the place, an electric jug half-full of mold, no restaurants nearby and no towel. But, then i thought back to that trip to Croatia, and what i've seen of southern Italy and the Med in general during the off-season, and how anyway these family-owned places are always a Fawlty-esque shit-show... I decided to just roll with it.

I bought some peanuts and beer and rice crackers from the kiosk across the road, then sat down to share passionfruit tea and jujubes with Y, some local friend or family member living in the place, and the other guest. I couldn't follow all of their conversation, but they were hitting on the standard Chinese topics of finding a partner, finding a job, and deciding whether it was better to live in the big city (more opportunities, but too expensive and too much stress) or come back to the village.

I turned in early, happy to at least have a warm bed.

The next morning i texted Y to ask where i could get coffee. She had already left for work, but told me "near the church". Weizhou Island was once a target for missionaries, so there are two old churches on the island, both of which survived the Cultural Revolution. I struck out on foot, across the dam and between the banana trees.

It should be noted that chickens and dogs and water buffalo are less scary in the light of day. Or perhaps i was just getting used to it.

My map led me through some really janky roads that in places were literally just a dirt path wide enough to drive an ox. It also took me right through the middle of small villages with people choring and smoking and pottering. I was thrilled to pop out near the church and immediately see a sign for coffee.

I was much less thrilled when i found that the café was apparently not open because fucking off-season. In fact, most of the shops weren't open. By this point i was about to lose it. Hungry and tired and no fucking coffee, i wanted to cry.

And then i met a laowai. Again, no point being coy because there are literally only two on the whole island. He's a retired American who decided to settle down in the country and open a restaurant. Since they just moved locations the restaurant isn't officially reopened yet, but he took pity on me and brewed me a real coffee.

But first this Tony Bourdain lookin' guy gave me a few shots of rum.

My day got a lot better.

We chatted for a while. He's a nice guy, living retirement the way it should be done - kicked back on a tropical island, making food, drinking booze, listening to tunes, taking walks on the beach, playing with his dogs, hanging with his wife and chatting to any foreigner that walks by. But i still wanted to see that beach, so i bid adieu and said i'd be back for dinner.

I made a bee-line to the beachfront stalls where i bought an incredibly expensive and mediocre 凉面. Fucking off-season. Then i headed south, at peace with the fact that i would just live off sweet tea for the rest of the day. The beach was beautiful and almost completely deserted. I walked all the way down the island, to the point where the beach switches from sand to volcanic rock and coral. I switched to flip-flops and waded through the water. I took photos. At the top around the multi-colored rocks there were a few villagers selling bananas and coral and snacks to the odd tourist group. I bought a deep-fried sweet potato 饼 and chomped my way happily back through the banana trees to the smaller church. Something that S had explained to me is that on this island the "villages" are no joke. Each village has its own name and its own plaque explaining the ancestry. Each village has a different chief and their own tiny culture of 150-200 people.

I mean, it's fucking ridiculous. The villages are literally only a half mile from one another. But as i walked through the island i started to see what he meant. Each village has its own vibe. Some are richer and some are poorer. Some are piled high with trash and other ones have street lights and a general store. Of course, the villages by the churches are rich, because that's where the tourists go.

I got stranded at one point, stuck on a stretch of road with a herd of goats just standing there staring at me. I have now added goats to my list of farm animals that are fucking terrifying. I just stood there waiting for a motorbike to come past, then i waved the guy over and said i was scared and could i go with him. He laughed and said i needn't worry. When he gunned his engine, the goats ran.

I walked very quickly past that farm. 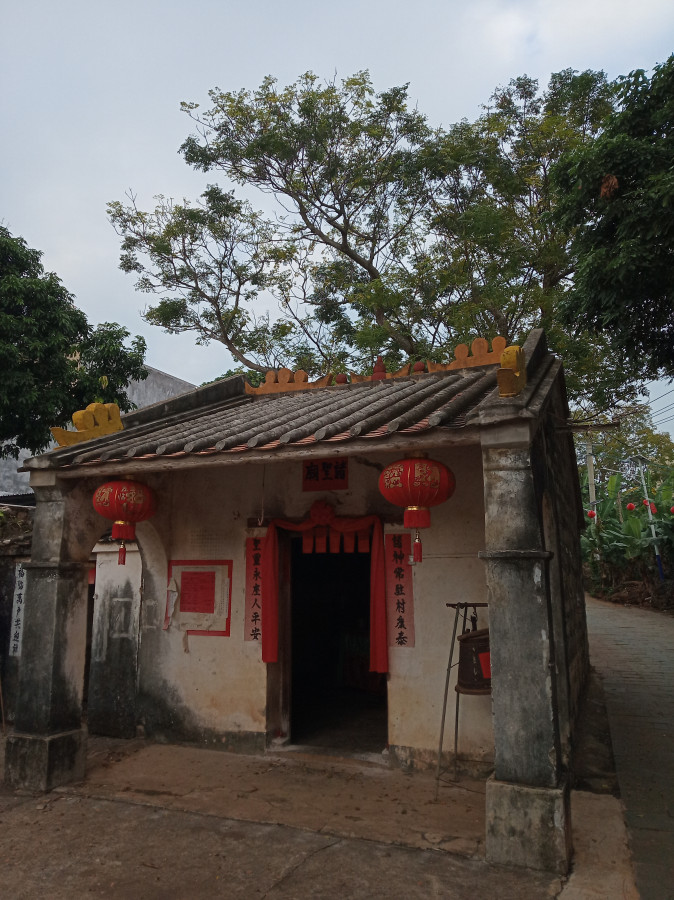 Eventually night fell, and i ended up back at S's place, where his wife prepared a goddamn San Francisco style sourdough soup bowl with Irish beef stew inside. I tell you what. That's the first real bread i've eaten since i left Europe, and it was fucking good. I almost cried after the first bite. And beef stew! Man, i eat non-vegan more or less once a month, and this was one hell of a treat. Possibly even better than a pork bun. I drank a lot of his different infused rums. Banana rum. Cherry rum. Durian rum. Peach rum. Fuck yeah.

You know rum is my favorite hard liquor, right?

I told him i'd order a few bottles when i got back to Shenzhen, then took an expensive tuk tuk home.

Friday morning i decided to take the first ferry back to the mainland. There was actually more of the island i hadn't yet seen, but i was hankering for a proper shower and a coffee not given in pity. I may return some day, in sunnier weather and with a more comfortable booking.

I was pleased to find that inside the departure hall there was a little Hong Kong chain serving 车仔面 (curry noodle) and black coffee. A nice way to send me off.