After birthday breakfast (nothing special) and coffee, i decided to head over to Xili area to check out the vibe.

When i popped out of the subway i was surprised to see a reasonably bustling corner. It was still Spring Festival in Shenzhen so most of the shops and restaurants were closed, but unlike the area where i live there were actually people milling about. Some oldies playing chess. Street hustlers hawking USB cables and key chains. The stinky tofu and bubble tea vendors were doing brisk business. It was nice to not feel so lonely during the new year break.

I'd previously visited a quieter side of Xili, but i had never seen the commercial center. It exceeded my expectations. They have a department store, a movie theater, a late night BBQ street, western fast food places, plastic stool restaurants and a wide pedestrian arcade with all the usual high street outlets. It reminds me of the area that i lived when i was studying Chinese, before i got a job and had to move - a place where people actually get out and live, not just a place where they sleep and work.

I only found one real estate open, so i ducked in and swapped WeChat details. I know i could find a place on my own and save the commission - the agents just look on the same websites i do - but work leaves me so exhausted i'd rather be able to queue up some inspections and get it all done on one weekend. That will probably be next weekend, once everyone gets back from their hometown.

After checking out the community, i wanted to check out the hiking and biking opportunities. I didn't notice any obvious foot trails, but i decided to take a bike around the reservoir to see what i could see.

There were several stretches of proper greenway, but most of the way i took the road. The whole expressway was deserted. I suspect that might be more because of Spring Festival than anything else, but here's hoping that particular route to Dongguan is a lightly trafficked one all year round because it was a nice ride.

I ducked into a side street and headed into a village. There were a couple of laneways on the map that seemed to head into the green, so i just followed them up. 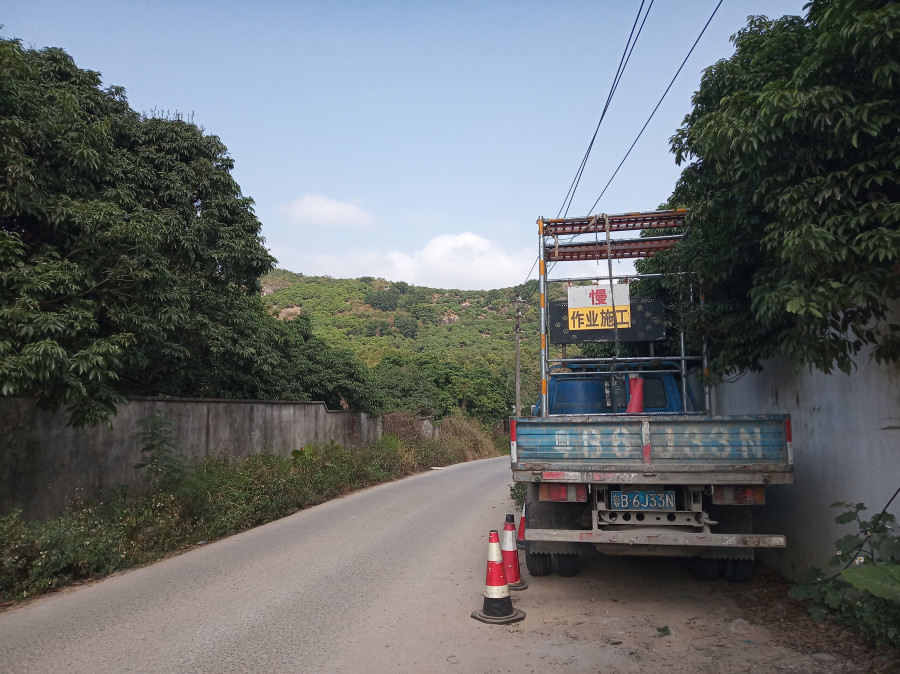 At a certain point the lane turned to gravel. There were a couple of off-leash dogs but they were quiet and didn't seem bothered. At one point a forest fire crew zoomed by in a pickup truck and waved, so i figured i could press on. The road got very steep and narrow. I hopped off to push. I was loathe to lock him up because what if i came out the other end and then i'm stuck in the middle of nowhere with no steed?

The top of the hill was pretty great. There was a granite half-dome. Who needs Yosemite? Hilariously, at this point i fat-fingered my phone camera and somehow it ended up taking a sepia photo. Looking back for something to post i feel like the ghost of Ansel Adams conspired to mess up my shot. Whatever. There was peach blossom. I was happy. 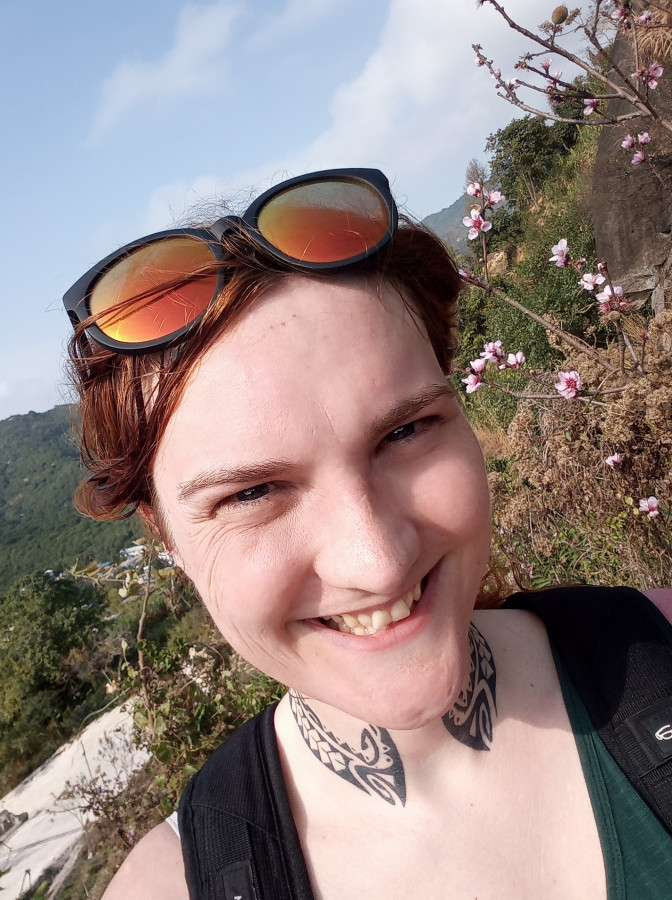 Down the other side of the hill you could see across to Yangtai mountain, which is one i've seen from Tanglang mountain and always wanted to climb. Of course, it wouldn't be China without a factory in front, but there you go. Pearl River Delta realness. I decided to walk my bike down the hill too, since the road was incredibly steep and i didn't want to break my neck on my birthday. And - lo - at the end of the hill was the Chinesest fucking thing ever. A padlocked gate and 6-foot fence to stop people from the roadside coming up the hill. Which, of fucking course there was. On the village side of the hill there had also been a couple of gates saying "private property", but they were wide open and locals were obviously using the hill as a place to hike in spite of the signs. But on the side that is exposed to random passers by? Verboten!

I cannot count the number of times in China i have walked into nature on the secret/village side of a mountain and then gotten stuck trying to get back out of it on the tourist/public side. Usually i just jump the fence.

Except this time i had a bike. Technically i was still in a valid drop-off zone so could lock the bike on the wrong side of the gate, but yeah. Middle of nowhere. So i fucking hulked up and lifted the bike over my head, then tossed it over. I grabbed my hoodie out of my backpack and wrapped it around the wire like they do in heist movies, and climbed out. I did end up tearing open a bit of my arm, but that just made me feel like even more of a badass.

That immediately switched to sheepishness when i heroically swooshed out of the grass and a public bus pulled up. Guess i could've left the bike, eh.

Instead i followed the bus east and visited two more villages on the way back to Xili central. The two villages up there seem to be "company villages", just factories and the people who work there. Their lives probably aren't much fun, but at least they have a good view. I stopped in for some sweet tea and spied a fashion school. Artists and proles. Seems like it might be worth heading up there again when everyone is back.

Coasting down the hill to central Xili i passed the part of town i had visited before - the cleaner and quieter area right next to the universities. There are more cops and less shops, but likely i couldn't afford a condo there anyway. I ducked into another real estate to swap WeChat details before grabbing a shaobing and a bubble tea. My last test was to bike back to my office to gauge the commute.

It's greenway all the way. 20 minutes by bike would be a damn sight better than my current 35 minutes on the train plus 10 minutes of walking on both ends.

After i got home i bought some prosecco and then enjoyed a Skype date and drinks with R till 4 in the morning. So, yeah, not a bad birthday.

I don't want to go to work tomorrow.
Collapse