A little while ago

benicek left a comment saying that i appear fairly self-motivated, at least for someone who is a diagnosed depressive. It got me thinking about how much time i spend actually doing externally interesting things versus how long i just lie in bed and let the hours slip away.

I spend a lot of my life just lying in bed and letting the hours slip away.

That is where i left you during my last entry - lying in a bed in a budget hotel in Huizhou. I spent around 36 hours in that bed, and it was great.

Thursday morning i got up and resolved to head back to the city. I took the scenic route to the bus station, a 10km loop through the apparently-famous West Lake and a climb up the hills around Honghua Lake.

If you've seen one misty 山水 (mountain/water) vista, you've seen them all. I don't really get tired of it, and neither do the local tourists. Here are a couple taking photos in front of a waterfall that looks like it belongs in a casino lobby. 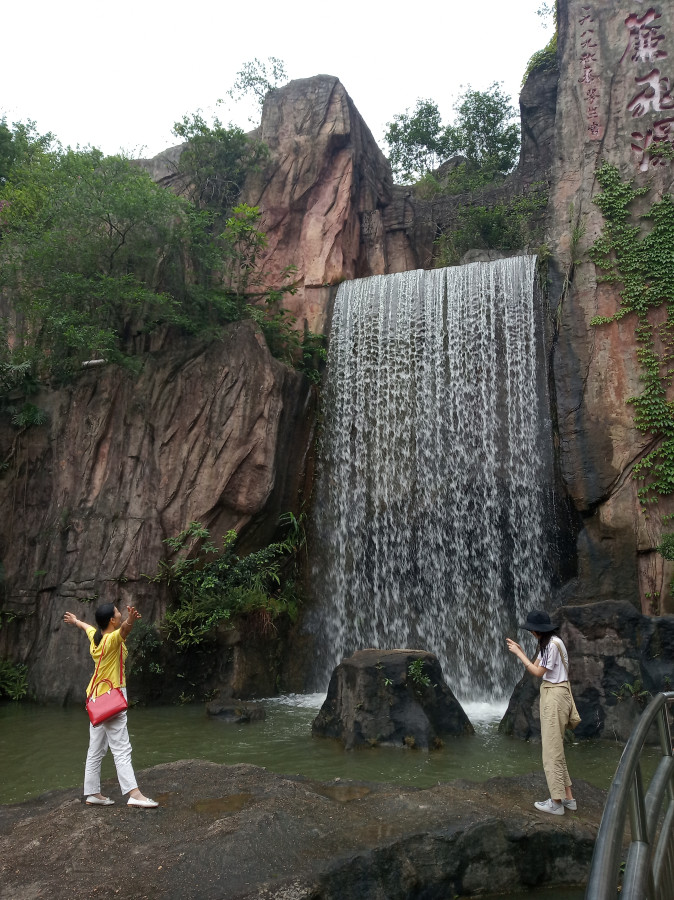 The plaque says that philosophers and poets have come to enjoy these falls for hundreds of years.

It's not really clear how much is "natural" in Chinese parks. Things feel artificial because there is no effort to hide the fact that the place is maintained. Hiking paths are paved with concrete. Steep inclines are cut with stairs and railings. On every angle where you can sneak a photo of "pure" 山水, you only need to turn the camera a half degree to see the highrises of a modern city, or at the very least a pagoda. And you can guarantee that pagoda was actually built in the last few years, no matter what story of ancient glory is on the plaque.

But that's the charm of China. It doesn't shy away from being exactly what it is - a land of great beauty that has been exploited by humans for thousands of years. Europe is the same, except Europeans are more coy about replacing old buildings with new ones. The Chinese just steamroll it and start again, bigger and better than before, because why not? We shape everything around us just by existing. After that entry a few weeks ago when i reflected on how much time i spent doing nothing, i decided to make a list of things i wanted to accomplish in between finishing my last job and starting the new one. "Book a holiday" was one of the things on that list. Really what i meant was "get out of Shenzhen". I checked that off the list as i sat in the bus heading back to town.

It was a little jarring. There is a legitimate slice of wilderness between Shenzhen, Dongguan and Huizhou. Mountains that are undeveloped and have no marked roads on them at all. When i popped out the tunnel on the Shenzhen side, the density hit me in the face. Dongguan has 8 million people and Huizhou only has 4.5 million. Shenzhen has over 20 million. The freeways and skyscrapers felt oppressive after just a few days in towns with more space.

I buried myself in my book, which was another item on my list. It was Brenda Cooper's Edge of Dark. One of the story points is transhumanism, and specifically humans who upload themselves into robots.

You guys, i would do that in a heartbeat.

Now, sometimes it's nice to revel in the muck. God knows as a raver and former drug addict i've done it. It's fun to just be dirty and smelly and not give a shit. It's also fun to push your body to its limit and grin proudly through the pain. And for sure, consuming delicious food can be glorious.

But it's also disgusting.

I would give up everything to upload myself into the machine. All the time i waste maintaining this sorry sack of flesh i could be spending reading more. Learning more. Traveling more. I could go places humans would never be able to go. I could be on Mars already, a little piece of me inside a rover. How cool would that be?

Being a robot would be the best.

Instead i am lying on my bed, feeling guilty that i don't have the energy to get up and go to the eye doctor. It's another item on my list.

Tomorrow i have to go to the foreign experts office for my work permit, and the police station for my resident permit. I will need to be "on", and just thinking about it has sapped all the energy i have for today. Sunday blues.

Well, i have brewed a pot of coffee. That is one thing that will make my human self happy.

Here is a slightly sunburnt, rain-dampened, butt-chapped amwbot sitting next to ancient Chinese falls that are probably turned off at night. 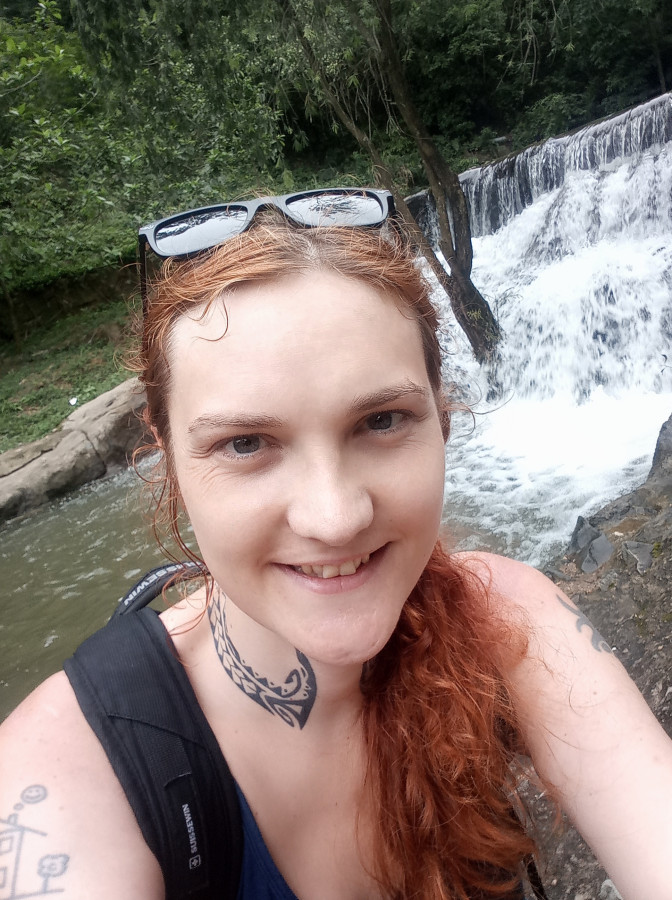