Sunday it was a rare sunny day in the Pearl River Delta, so i packed three shirts and some toiletries in a bag and biked to Bao'an bus station.

I was originally considering going to Shanwei, which is a town so insignificant its Wikipedia entry is like one paragraph long. It's between Shenzhen and Chaozhou/Shantou, but the buses going there all start from Luohu, in the east side of Shenzhen. Instead i resolved to go to Yangjiang, which is another coastal town but going west on the way to Hainan. Perhaps because it was Sunday, it turned out there were no buses to Yangjiang from Bao'an bus station when i got there, so i jumped on a bus to Zhuhai instead.

Zhuhai was probably a better destination anyway, because i am currently without a passport. I am traveling using a special piece of paper with a red stamp on it from the Shenzhen police department that is supposedly equivalent, but is probably infrequently seen by people outside the big cities.

The bus ride was long, mostly because we stopped at every goddamn bus station on the way out of Shenzhen. We zoomed past Chang'an and Humen, along the south side of the reservoir where i did my long ride to Dongguan. The entrance to the Humen bridge is pretty epic, with some cliffs and tunnels. Then you pop out and cross the Pearl River, bulk carriers sailing out to sea on one side and the skyscrapers of Guangzhou on the other.

After the bridge you're in straight up rural Guangzhou. Dykes and motorbikes and pointy straw hats. Heading south past Zhongshan you hit Zhuhai and the coastal road. Boardwalks. Palm trees. Beaches. It's totally different from Shenzhen's muddy ass coastline and way better. 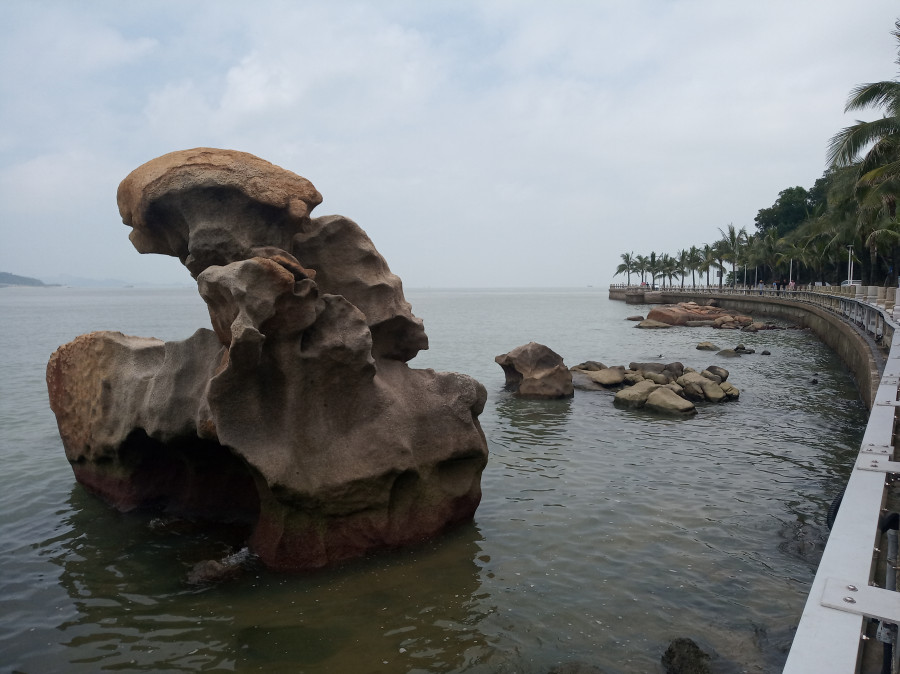 It was after i jumped out of the bus that the disappointment started.

I've been here 30 hours now and still haven't eaten anything good. Most of the restaurants are Hong Kong style, either milk tea and french toast cafeteria places, or full-blown ong choy drenched in fish stock Cantonese joints. The upside is that it is much cheaper than Hong Kong. The downside is that the quality is not as good, although it hardly matters because everything is bland anyway.

People speak Cantonese here. It's the first place i've been to in mainland China where almost everyone speaks Cantonese. Most people speak Mandarin/Putonghua as well, which is a nice change from Hong Kong, but it doesn't feel like their first language.

They even allow a few traditional characters around the place. In Shenzhen you will never see a single traditional character. Here some of the chains use their Hong Kong logos instead of the mainland logos, like it was easier to ship a sign over the river than it was to get one from up the delta.

It's a peculiar vibe, because it does feel Hong Kong-y, but it's also clearly a mainland city. Wide roads. No temples. Hammer and sickle. Still, it feels way more like a suburban overflow of Hong Kong than Shenzhen does.

I get now why they built that bridge from Zhuhai to Macau to Hong Kong. It seems weird to build a bridge between three cities that all need a passport check when they could have just linked two mainland cities together, but now it makes sense. Culturally i suspect these three cities are much closer together than Shenzhen is to any of them.

That bridge is fucking badass by the way. It's awe-inspiring to see a huge line of concrete on the horizon where there should just be sea. Really incredible. I would like to take a ride across it some day, but i'll need my passport for that.

The other badass thing is the Zhuhai Grand Theater. It's built out on an island accessible via a causeway close to my hotel, and it has a striking split shell shape reminiscent of the Sydney Opera House. I sat down there and had a beer and some french fries at a European-style restaurant. That's literally the best meal i have had here, although sitting on the deck looking out at the South China Sea probably helped. 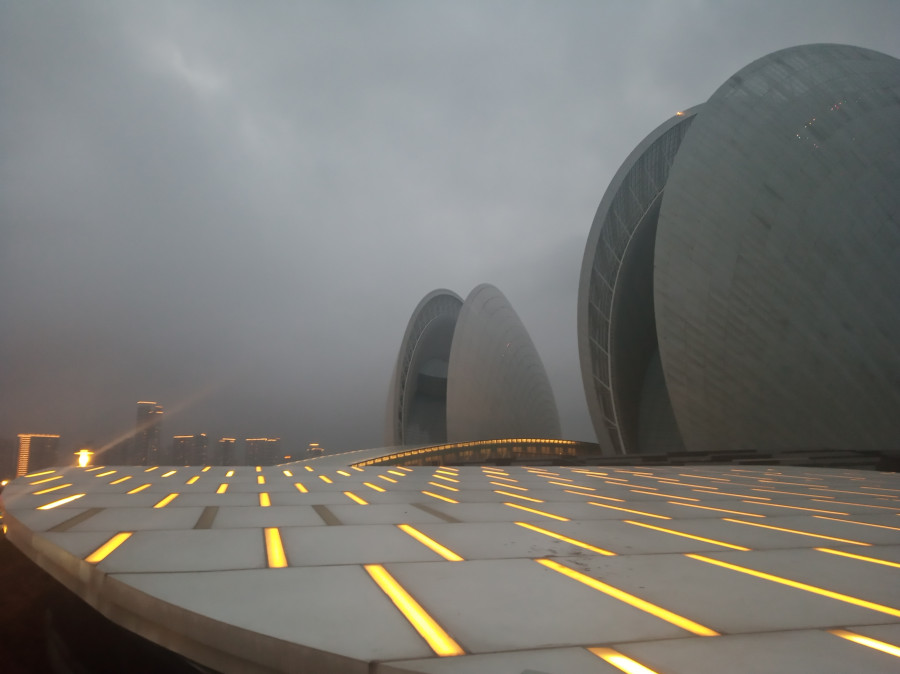 I also climbed a mountain where i encountered some local wildlife. The start of the climb was inside one of those Chinese "ancient" parks where they build fake pagodas and you can get your photo taken with actors dressed up in period clothing. They also built a fake great wall up to the first peak, which was kind of neat to climb. Unfortunately, if you are climbing stone steps with stone ramparts on both sides and two 6-foot long snakes come sliding down the stairs, there's nowhere to hide. I climbed onto a rampart while the guys in front of me jumped around like the floor was lava.

The scramble up to the second peak was great. It's rare in China that there are natural trails where you need to use hands and feet. I had the whole place to myself. Up top there were some abandoned buildings, and it was cold. It's humid on the beach, but the clouds rolled in yesterday and they are so low that even on these small peaks you're in the mist. It's kind of nice, though, because it hides the skyscrapers and makes the city feel smaller than it actually is. 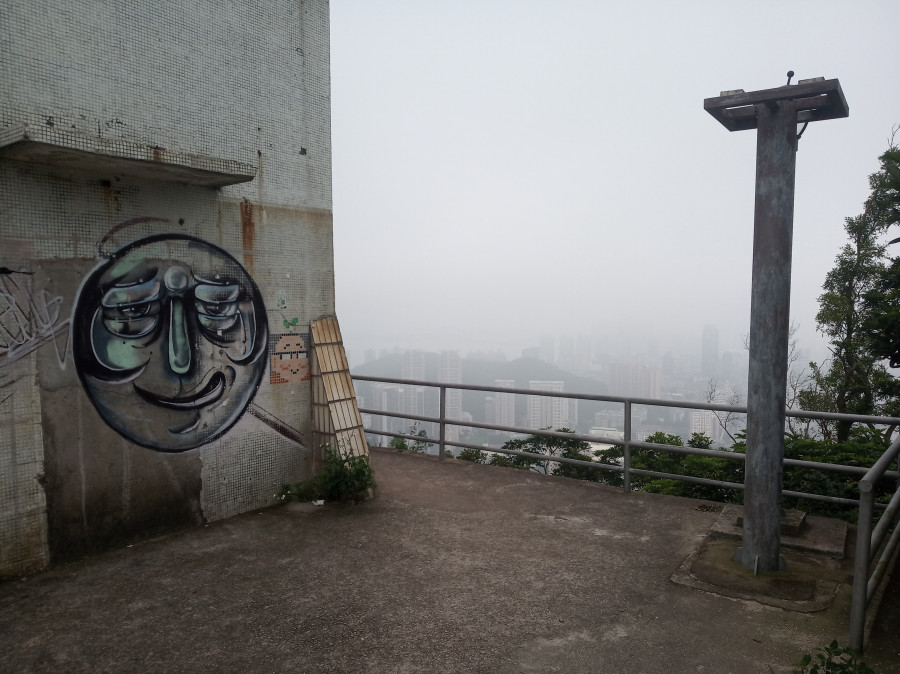 I found an okay local bar last night, where i ended up drinking Coronas and chatting to an expat till 1 in the morning. He was one of the first expats i have met in China who wasn't a selfish, racist piece of trash, so that was nice. He did missionary work in Mongolia just after the Soviet Union collapsed. Crazy stuff.

I wanted to go to Hebao island, which is way the fuck out west (you apparently need to take a taxi and a boat and a moped to get to the beach there), but with the hangover i didn't really feel up to it. I biked to the Macau border instead, which was extremely unremarkable, then headed on that hike.

I still have one more day free before i need to be back in Shenzhen to pick up my passport. I was going to spend three days here, but i feel a bit deflated. Walking by the sea was nice, but it made me miss Kaohsiung. Climbing the mountain was okay, but it wasn't as wild as i hoped. Yeah, it's nice to ride sharebikes along the coast and the people are fairly friendly, but... eh. It's just okay.

You know, i think it comes down to the food, man. I'd probably be happier if my tummy was happier. It's hard for me to really enjoy holidaying in a place with mediocre food.

I might head back via Dongguan. It would be cool to see if i can get to the area around the Humen bridge on a sharebike. Let's see how the weather is. Maybe i will take a boat to a different island.

Next week i start work again. I feel like i did not make the most of this time between jobs.
Collapse