Yesterday i had a lazy morning, then packed my bags. On a whim, i biked to the ferry terminal to see if there was a boat going. There was, so i set sail for 外伶仃岛 - Wai Lingding Island.

I love traveling by boat. I always forget how much till i am on one. They are less scenic than buses or trains and they rarely have food or entertainment worth a damn, but for some reason i find them relaxing. I think it's because they take you away from the hubbub and you are forced to slow down.

Well, perhaps i make it sound more romantic than it is. The days of junks and the iconic double-decker Star Ferry cruising the Pearl River Delta are long gone. Everything west of Victoria Harbour is an air-conditioned catamaran now. You have assigned seating and the windows are grubby and you cannot go outside.

I still felt like a pirate walking up the gangplank, though.

Wai Lingding is south of Hong Kong, between Lantau Island and Hong Kong Island. I really hope everyone can picture Lantau Island in their mind, because it was so misty my photos couldn't capture the dark outline peeking out of the clouds. Here is a view in the other direction, out to the open sea. 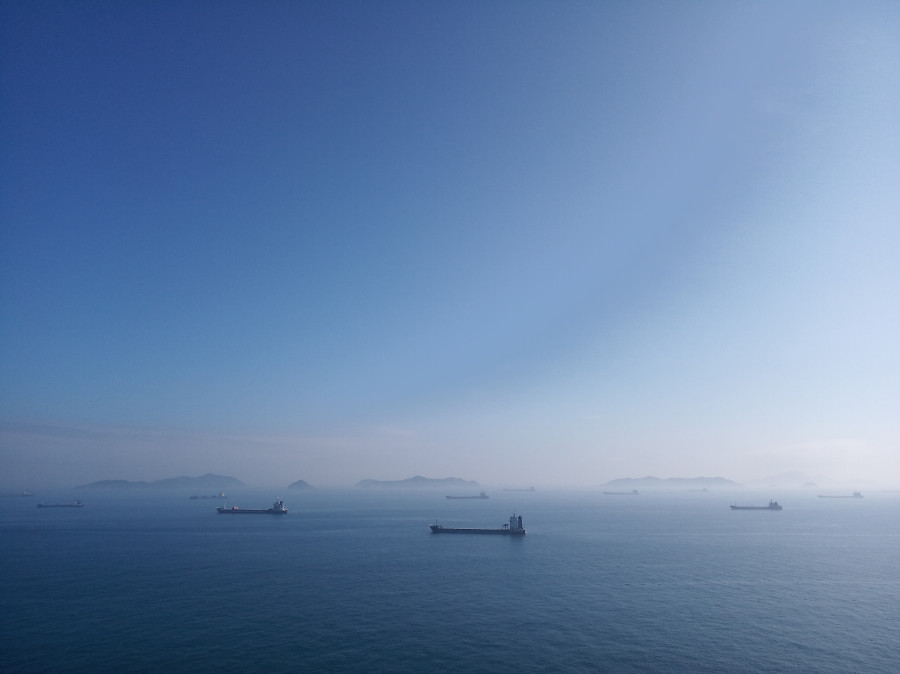 Man, i fucking love the South China Sea. There's something about it that feels mythical to me. I think much of the Guangdong coastline is a flooded mountain range, so the only things poking out of the water are these improbably steep, jungly spikes with tiny sand coves here and there. It's hot and dirty and steamy and full of dragons.

Wai Lingding is still a small fishing community. There are a few delapidated guest houses and restaurants, but that's it. The local government is trying to redevelop it. For some reason a whole new street is being built in the style of an alpine holiday village. Personally i prefer the formerly fashionable faux Greek look. The restaurants only sold seafood prepared in Cantonese style, so i just bought some mini bananas then headed out of the village to start the climb.

Lordy it was hot. It's probably less than an hour to the summit, but i went through 1.5L of water along the way. There is a little shrine with a golden buddha halfway up, plus a lot of overgrown army barracks. Near the top the path winds between massive boulders where you have to shuffle along sideways and bend double to fit through.

It's worth it. On a clear day you would easily be able to see Hong Kong, possibly even the Tsing Ma bridge that links Lantau to Kowloon. It wasn't a clear day. It was a great hike, though. I made it back down to the ferry just in time to buy a bubble tea then head back to Zhuhai.

By the way, sailing under the Hong Kong/Macau/Zhuhai bridge is just as spectacular as seeing it extend off into the distance from the land.

It was sunset when we came ashore. I took a sharebike and booked it from the island ferry terminal to the commuter ferry terminal, where there are regular departures to Shenzhen and Hong Kong. Hungry and sunburnt, i jumped on a boat back to the big city. It was a fair bit more expensive than the bus, but much faster. I just wanted to get home.

Out front of my house the street vendors were out in force. It felt like they were welcoming me back. I picked up dumplings and potatoes and tofu and sweet tea, then went to bed with a smile.
Collapse