As a follow-up to my last post, i was thinking about cities and population density.

Let's start this by pointing out i really am a city nerd.

I am 39 years old and i have only exercised my political franchise once in my life. This is largely because there are only two elections in my life that i have ever been eligible to vote in: the 2014 EU elections (i didn't register in time) and the 2016 Friedrichshain-Kreuzberg local council elections (i voted for a minor party that picked up 0.3% of the vote). All the rest of my life my country of residence has not allowed me to vote in elections at any level.

However, voting in 2016 was not my first engagement with civic duty.

The year was 2005, and my new friend slash fuckbuddy slash partner (i'm not sure what we were yet) was finishing up her social work degree. She thought i was a flop for not being more engaged in Australian politics, so she signed me up for a series of workshops and conferences that the council organized to get feedback from residents on future urban development. I think she was surprised that i ended up far more into it than her. Or perhaps she knew it was my thing all along.

At the time the model city of the world was Vancouver. A lot of urban planning experts gave presentations about it and helped facilitate group discussions around how we thought we could apply those learnings in Brisbane. I was a passionate advocate of high-rise development like in downtown Vancouver, although that was less popular amongst other participants who thought "Queenslanders" (wooden stilt houses) were part of the local culture and shouldn't be replaced across the board. We talked a lot on pros and cons, brainstormed and voted and actively participated in fucking democracy. Something we all agreed on was that the major infrastructure investment should be in busways and greenways over tunnels and bridges. It was surprising and pleasing to see such a diverse bunch - at least as far as age and ethnicity goes - all prioritize public transport, cycling and walking over private internal combustion vehicles.

The big thing coming out of the sessions was that collectively we favored the idea of a building a city of "urban villages". In that context, we were using "urban village" to describe multi-storey developments clustered around a public transit hub with commercial on the lower floors and residential on the upper floors. I.e. something a lot like the Hong Kong new towns. Then radiating out between the patchwork of hubs, the density would decrease to allow some of those traditional single-family homes to remain.

The plan was called CityShape 2026 and it was controversial because it would require the rezoning of formerly low density residential areas to execute. It's almost 15 years later now and i haven't been back to Brisbane, so i'm not sure if any of it got made into policy. There was an epic flood that destroyed half the city a few years after i left, which seems like a good opportunity to rebuild properly, though i'm not sure the people who lost their houses would see it that way. I'm skeptical now, but back then i was optimistic. I really thought as residents we could have an impact on the future of our city - have it become the green utopia so many of us wanted.

Here in Shenzhen the dream has almost come true for me. I mean, Shenzhen is a goddamn disaster. It's China, so entire neighborhoods are marked for demolition on a whim. They rip up the roads every two weeks, resurface them and then rip them up again like it's Lego bricks and not poured concrete. But, on the other hand, subways are going in everywhere, and around those metro stations you do get clusters of mixed-use development just like in the Hong Kong new towns. There aren't really any single-family homes because that would be ridiculous, but there are plenty of rickety tenements and dank alleys that form part of Shenzhen's local culture. The good news is that the council recently recognized these areas as an important part of the city and have put a halt on demolitions.

Anyway, this brings me back to the topic of density. You remember when the government blocked Wikipedia and i was really upset because i spend so much time on it? One of the things i like to read is city pages. Australian cities like Brisbane are drawn to include a lot of empty hinterland, which makes it difficult to get a feel for the real population density from the formal statistics. That's true in much of China too, but the PRD is fairly unique in that the whole goddamn region is so tightly packed that density metrics "feel" just about right.

According to wiki, Hong Kong has 7.5 million people and a density around 7000 per square kilometer. Shenzhen has 13 million people and a comparable density, officially. Unofficially we have 20 million. In any case Hong Kong has more greenspace than Shenzhen, so they have these stupidly tall pencil-thin skyscrapers, whereas we have more prefab tower blocks and miles and miles of tenements.

When i was in the UK i saw that London has about 8 million people and 5600 per square kilometer, which feels weird because London doesn't feel dense at all. But then, maybe it doesn't have much greenspace either. I guess density statistics can be misleading, because the densest "city" in America is only 4 blocks long and it's in New Jersey. It's literally just a handful of tower blocks and a council chamber.

But then i think about how many similarly tall tower blocks i pass every day on the way to work and it makes me ponder what the real density is around me. I am about 11km from work. If i imagine a "tunnel" of 500m to my left and right, and taking the city average of 7000 people per square kilometer, i should pass 77,000 people on my commute. Except i know that a larger section of my ride is past 20+ storey towers and not 7 storey tenements, so it could be double.

Jesus, 150,000 people and there still isn't a decent coffee shop on that route. Fucking China! But seriously. To service those tens of thousands of people there are department stores and fast food outlets and fancy restaurants and schools and gyms and everything else. I could get pretty much everything i need in that north-to-south tunnel of my commute, but fortunately i don't have to because the city stretches out 80km from east-to-west - not just 1km - and there's another 20km north of my house. So there are at least a handful of places to get good, cheap coffee.

It sort of feels amazing that we don't spend all day tripping over each other, but i guess humans don't need much space. I remember reading Cixin Liu's Three Body Problem series and at one point a character mentions that you could fit the entire population of the Earth into Shanghai, if we all just stood holding hands.

So, i kinda think this idea that racists like to haul out about how the Earth is over-populated and poor people in third world countries should stop having children is garbage. I live in a relatively dense city and there is still a lot of room to breathe. There are trees, there are flowers, there are birds. It's not a Garden of Eden, but it's far from a concrete box packed with flesh.

Somewhere inside of me is still that little optimist, the one who read Kim Stanley Robinson as a kid and still believes that humans one day will stop being awful and selfish and self-destructive. Urbanization will continue and billions of us will live in green cities, walking and biking and zooming around on electric vehicles. We will all live in urban villages. The suburbs will be demolished and replaced with farms. Rural towns and far-flung ranches will be handed back to the buffalo...

I won't live to see it, i guess. But that's a future that does excite me. Mass global urbanization. Complete destruction of borders and nationalities. Huge expanses of our planet rewilded. Maybe the future will look more like a network of glittering city states.

Maybe for some of us we're already back to the city state era, seeing as non-citizens like me are disenfranchised on every level above the city anyway.

Here is a cyberpunky photo of my new haircut. My hairdresser used one of those magical filters on his phone to turn me into an anime character. 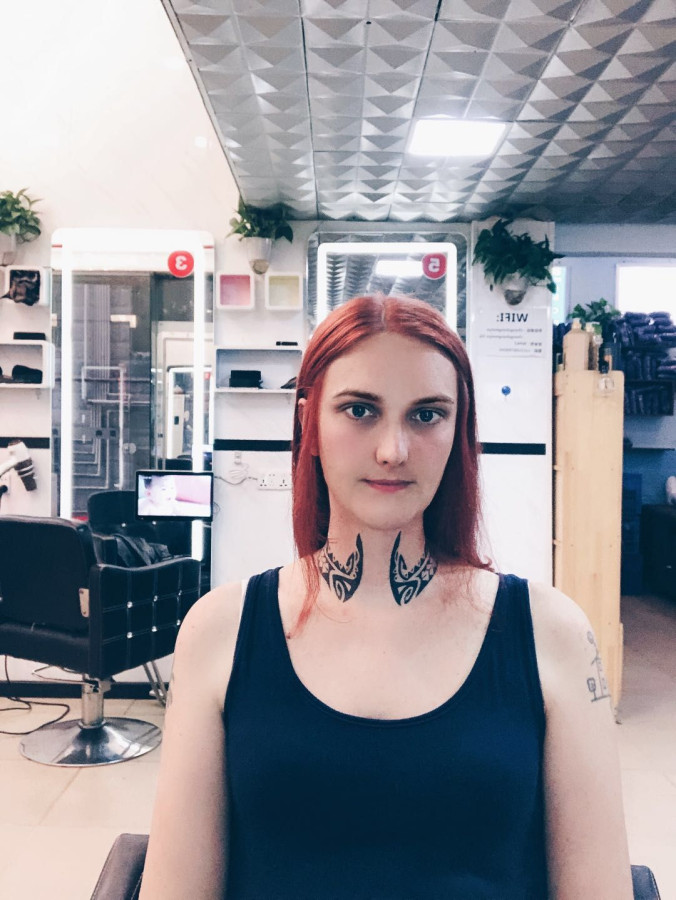