I am back to working 5 days a week. It's exhausting. But the last two weekends i have also dinnered with L and C and Skyped with R. Even just one of those things would wipe me out a whole weekend. I haven't read LJ. It's all too much socializing. I am zonked. I need a few weekends with nobody and nothing.

I'd like to tell you guys the story about meeting C last Friday because he has a funny slash depressing continuation of the story of my nemesis from the place i worked before my current job. But i'll save that for later. Remind me if i forget.

Two Saturdays ago i went out for dinner with L to talk work and things. Things included the Hong Kong protests and Brexit and communism. She said most mainland Chinese think communism is garbage because party cadres tend to be the richest, most corrupt people in the community. Also because of family stories from the Bad Old Days.

She told me about her family's stories of the Great Famine. It was chilling. One story was about how a couple in their village secretly killed one of their children so that they could continue to collect the extra rice share and feed the rest of the family. Another was of her grandfather losing his job and having to get home from the distant work site without money, transport or a meal. They found him collapsed on the road the next day, left for dead. The rumors were that some people resorted to cannibalism, they were so desperate.

The government here can control the media and the education curriculum, but they can't control family history.

When my mother passed away, i climbed 羊台山 (yáng tái shān). It's the beautiful conical mountain i can see from my apartment window. Things have been so busy with work. Every now and then i get emails from the family or from the lawyers trying to figure out legal shit around mom's belongings and the will. I don't give a shit about any of it. I just miss my mom. She didn't really have stories, but we talked about all the things.

The day after dinner with L i biked up to the village near the foot of Yangtai mountain and went for a climb. I chose a different path up the hill this time, but it still started by zigging and zagging through some peasant shacks. For the first couple hundred meters you share the path with chickens and ducks and dogs. It feels like walking through someone's garden, until it doesn't. At a curve in the trail where the only thing around to see was longan trees, i climbed on top of a boulder and cried.

It was a dark day with thunder clouds overhead, but it didn't rain. There were more hikers than there had been that first time on a weekday, but still very few for China. I nearly stood on a snake. Almost every pair of trees had a web with a spider as big as my hand hanging at head height. The humidity had made the ground softer, but you still needed to cling to tree trunks and roots on certain slopes.

My mom would've liked it, i think. The south face, at least. 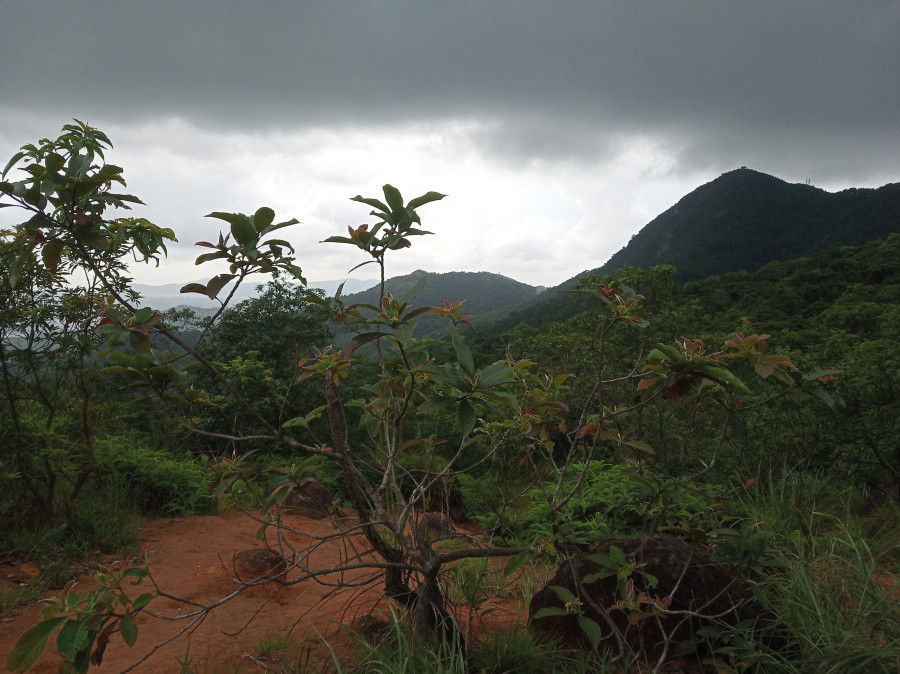 Once you get to the Big Yangtai peak, stairs are cut to the north and all the paths are paved. I hiked east to Little Yangtai peak, where some guys were blasting dance music and shooting videos of daring leaps onto and between the boulders.

Just two minutes away i found an overgrown path. It was narrow and steep and headed almost straight down to the reservoir. After succesfully ducking webs for 2.5 hours, on this slippery downhill i plowed straight through the middle of one, freaked out, and flung a giant spider away from my head before it bit me. I think it was probably more scared than i was, but lordy it was a shock.

It was nice to get back down to the reservoir and greenway. Oldies were out on their after dinner stroll. I probably looked a state with hair full of golden silk goo and a mud-stained ass.

I left the mountain area through the factories on the east side and bought some pastries at a wet market. The subway was packed, but my home was quiet. I ate fruit salad. Yellow water melons are in season and peaches are coming in. Dragonfruits, guavas and grapes are the year-round staples at my local store.

Did i tell you the police kicked out our local street vendors? I have to go down a back alley now to sneakily buy home fried potatoes and dumplings. Fuck the police.

I need to remember to get out hiking more. 20 minutes from my house i can easily spend 3 hours on Yangtai mountain and in the other direction it's a good 2 hour trek over Tanglang mountain. I guess i am biking 2.5 hours a day, 5 days a week now, so i am permanently aching and sunburnt and UTIed... but that's urban chaos, rush hour shit. Encounters with the fauna aside, there's something pretty great about getting up into the hills. Lets the mind go a bit.
Collapse