I mean, temperatures are still above literal freezing, but they're also below 15°C and that's just unacceptable.

New Year's Day i packed my bag and picked up a coffee before going to the train station for the inevitable morning queue.

Side note: a very important thing has happened here in the past year. KFC now sells espresso coffee. Aside from the fact that KFC is far more widespread in China than Starbucks or McDonalds, their coffee is also now by far the best of three. This removes one of the biggest pain points of traveling to low-tier cities.

Anyway, i got my coffee and waited a stupid long time to buy a ticket for the slow train to Chenzhou. I got a ticket for later in the day so i'd have time to climb the mountain behind the train station with an epic pagoda on the top. 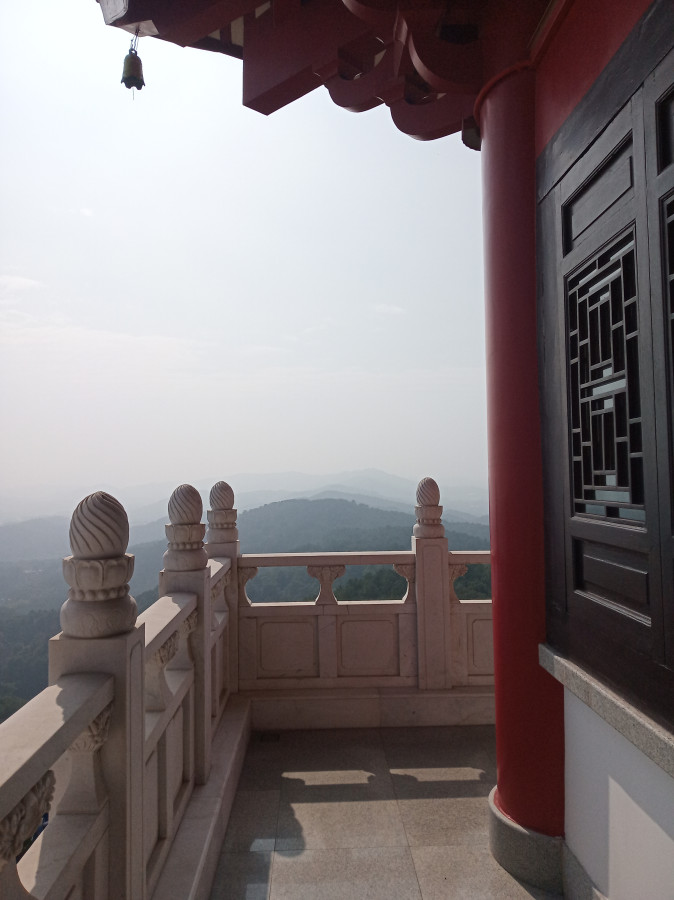 The climb wasn't long, but the pagoda was epic. Like almost all tourist sites in China, this is not actually ancient, it's new ancient. But that's awesome because in the actual ancient times they would never have been able to build a tower as high as this one. I am perfectly fine with new ancient stuff, it has a weird Chinatown tackiness to it that makes me smile.

I went back down the back end of the mountain where the tourists don't go, then ducked through some winding alleys between ramshackle apartment blocks hugging the hillside. There was meat and laundry hanging off the balconies. I had the strangest sensation i was in southern Italy. Eventually i found an abandoned train station, which was cool. 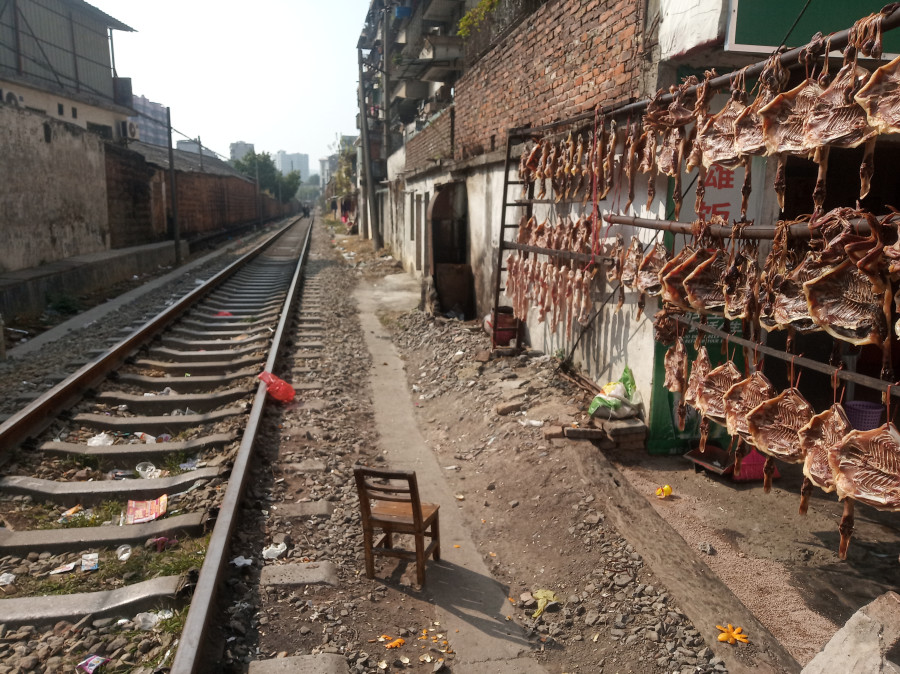 I also got spicy noodles in the village for 6元, which is the best thing i ate in Shaoguan.

The train ride under the Nanling mountains was a blast. I had a "hard seat", which is the lowest class seating on the slow train. Hard seat carriages are renowned for getting pretty messy over the 30+ hour journeys these trains do. It was already a chaos when i got on, and the train had only started in Guangzhou a couple hours earlier. I switched seats with a lady who was trying to get all her rug rats to sit together. I ended up surrounded by 5 guys who did not speak a single word of Putonghua. One guy kept staring at me like i was a wild animal or something.

Shaoguan isn't the real edge of Guangdong. It seems that the real edge of Guangdong is on the other side of the mountains at a place called 坪石镇 (píng shí zhèn), which means something like Flat Rock Town. The flat rock is wild. It looks like something out of cowboy movie, all striped rock formations rising up from the landscape. I fucking love that stuff. But the Flat Rock Town train station looks like another abandoned station, alas. The slow train trundled on, away from the hills and toward Chenzhou.

After i checked into my hotel in Chenzhou i headed down to the pedestrian streets to explore. Surprisingly, this city has one of the best night markets i've been to in mainland China. There were loads of food vendors selling all the usual night market stuff - meat on a stick, bubble tea, egg waffles, stinky tofu, icecream, fruit salads, noodle bowls, fried chicken, rice tofu, "hip" food trends like foot long french fries and on and on. I bought some Hunan style spicy pickled papaya and dried tofu, then ducked round the corner to a dark alley behind the wet market. Y'all, i found a place that does sticky pot rice. They sell this at fancy Hunan restaurants in Guangdong, but you'll never find a plastic stool place that does it for 12元. I got eggplant and potato sticky pot rice. The eggplant and potato was excellent - salty and spicy, just the kind of vege comfort food i wish i could find more of in Guangdong. But the magic of this dish is the rice, which is just normal steam rice served in a very hot stone bowl. By the time you get to the end of the bowl, it has gotten crispy and stuck to the edges, so the last few spoons of rice are golden-brown and even more delicious.

I also bought a zongzi from a guy on the street, which was aces. For those who don't know what zongzi are - they are those mystery bundles of glutinous rice wrapped in a bamboo leaf. They look like tamales. In Guangdong most zongzi are white rice filled with chicken and some other savory bits, but this one was black rice with some kind of peanut or something in it. It was very delicious.

I walked around the lake, taking in the usual Chinese night-time sights of older women dancing to techno remixes of revolutionary songs and couples taking after dinner strolls. Then i went to Gollum Pub, which i had to go to because it was called Gollum Pub. The logo is a cartoon Gollum. It was basically the same as every other Chinese bar: exclusively import liquor at 5x the price of domestic stuff, very loud techno/dance music, people playing dice and eating fruit and nuts and meaty dim sum like chicken feet. Usually i feel like a tool at these sorts of places because they are designed to be visited with a bunch of friends and i don't like to use up a whole table alone, but this was a rare one with an actual bar where i could sit, so that was nice.

I met a local, who didn't really have much interesting to say. So continues my theory that middle class Chinese, i.e. those who can afford to spend 35元 on a single beer, are somewhat vapid. He said "is everyone as beautiful as you in your home country?" which pretty much made me want to punch him square in the jaw.

This morning i woke up very cold and with a hangover. I was contemplating going to Dongjiang Lake, which is about a half hour's drive from Chenzhou and a 5A scenic area. (China's scenic areas are rated on a scaled from i don't know what the fuck to 5A, which is the highest/best/most touristy.) I checked some websites to try figure out if Dongjiang Lake would be my jam, but i resolved that it probably would not be. The pictures reminded me of Lake Tahoe, which is my least favorite scenic place i visited in America. Fucking. Lake. Tourists. Trees. Rich people.

Instead i went back to take a slow train up to the next "big" city on the line to Changsha. On the walk to the train station i picked up an old noodle bun.

In Guangdong they also have old noodle bun, but it's called 酸菜粉丝包 (suān cài fěn sī bāo) which means "pickle and glass noodle bun" and they're dim sum sized. In one of the Chenzhou alleys there was a bun shop that just sold old noodle buns, all the size of your fist, and you could choose which old noodle you wanted. I asked if the old noodle with pickle bun had meat and she said they all had meat, so i asked for whichever had the least meat. Whatever she gave me had barely a morsel of meat, but it had an awful lot of old noodle inside it.

If you can't get the appeal of a steam bun with noodles inside it, then i don't know what to tell you. Crisp sandwich. Chip butty. It must be something people dream up when they live in cold, miserable, cloudy places. It definitely hit the spot.

I also picked up a deep fried sweet potato fritter and some sweet potato jerky from a guy out front of the train station. So many street vendors, it was hard to decide.

The train up to Hengyang was uneventful. Much less rowdy than the New Year's Day train, although there were plenty of people listening to music or watching short videos on their phones. I am a big fan of the Chinese working class habit of not using headphones to consume mobile content. It makes for a cacophonous jumble of canned laughter and space invader noises and sentimental songs and wonky techno snippets. Something about it makes a place feel cozy, like everyone around you is enjoying themselves.

The train got stuck for a while in Leiyang, halfway between Chenzhou and Hengyang. And i did not care a whit. The greatest thing about being on holiday is not having to worry about anything. Train delayed? Oh well. Just sit round listening to the guy opposite watching the rural slapstick nonsense that makes up a huge chunk of China's short video scene. Hengyang is on the Xiang River, which is the river most famous to me for being the 湘 in 湘菜, i.e. the symbol for Hunan cuisine. (Another useful symbol to learn is 川 in 川菜 which is Sichuan cuisine.) It is a very big river. The city is very cold and very dead. It seems much less lively than Chenzhou, although it might just be a result of where i went. I am hiding in my hotel room until the evening.

My hotel room is freezing.

I was considering going to Mount Heng, which is one of China's "sacred mountains" and just a short bus ride from Hengyang. But then i looked at some pictures of Mount Heng in winter and it is like. Ice. Snow. For fucking real. I am not equipped for that shit. I do have a winter hoodie and a beanie back at home, but i didn't expect to need them in southern China.

Yeah, so, nah. Don't care if the traditional north/south split is Shanghai/the Yangtze. I am a full Guangdong snob now. Hunan is the north. It is grim as fuck out there. Leaves off the trees. Gray skies. Dead fields. I guess they don't plant anything till after the frost. The houses have sloped rooves on them, which looks weird because i am so used to the pre-fab housing of Guangdong and Taiwan. I expect all Chinese farmhouses to be three-storey concrete cubes on the edge of a rice paddy. All these brick hovels and cabbage patches makes me feel like i am in eastern Europe.

Anywho. They might be 北佬 (northerners) but the food here is way better than back home.

Well, let's see. I'll head out for a bite after i post this.
Collapse