I'm back in Shenzhen and i got the Sunday afternoon blues.

I woke up yesterday still sick as a dog, but i refused to let that ruin my last couple days off. After getting a coffee from KFC and having the sad Cantonese breakfast of 炒米粉 fried rice vermicelli, i hopped on a bus to Danxia mountain. It's about an hour out of town, but it's a popular enough tourist destination that there are regular buses going there. It was nice to see a bit of the Guangdong countryside up close. Bamboo, bananas, citrus. The trains just whisk you past it, and even greyhounds usually don't pull over at this kind of rural sideroad.

I have to say, Danxia is the best park i've visited in China yet. It's really well-maintained, but still gives you the illusion you're in the wilderness. Which is to say, they don't play fucking Kenny G over hidden speakers. If it wasn't for all the steps everywhere, it'd be just like an American national park.

Lordy, there are a lot of steps. But before you get to the worst of the steps there are some caves and canyons. One thing i've come across at several parks in China is that the rangers seem to delight in having tourists crawl on their knees through tunnels or shuffle sideways through crevasses just to follow the trail. It's part of the adventure, i suppose, but as someone who is a foot taller than the locals, it can be a bit intimidating to squish through. Yeah, then there's the steps. Rusty chain and a small railing to keep you from falling off the mountain. It's amazing more people don't. Survival instinct beats vertigo. The peak was awesome. Looking deeper into the park all these little crags and rockforms pop up out of the trees.

I headed down toward the back part of the park wanting to do a full loop, but the sign said it'd be another 4-5 hours, and i was already 3 hours in, so i took the "shortcut" back past the vagina rock and a few more temples.

Did i mention there were temples cut into the rock? All of them only built in the last 50 years, although some were built around grotto shrines abandoned a thousand years ago. The pictured temple is Daoist, and included a variety of colorful characters from Chinese folk religion - dudes with pointy beards and long mustaches and demon faces. The other temples were Buddhist and just had rows of golden buddhas. As a secular person, i must admit to finding the Chinese folk religion stuff far more appealing. It feels like each temple has its own character, sometimes featuring local deities. Then again, i am a bit biased against Buddhism, which is yet another organized religion with a stack of sexual abuse scandals and corruption issues.

I met a Buddhist on the mountain. A couple of monks commented on my tattoos, asking if it was normal in my country. The amusing thing is that in the low-tier towns of China that i visited on this trip, i saw more visible tattoos than i did in the big cities. Whether that's because there are more black societies (triads) in the small towns or because people in small towns give less of a shit about keeping up appearances i don't know.

In fact, i met quite a few people on the mountain, two of them from different companies doing team-building outings. One was the manager of a Guangzhou energy company: wife, two kids, completely bowled over when i told him i don't know if my sister is married or has kids. I said we hadn't really talked in years. He said that'd never happen in China. He kept trying to get me to walk with him - i think he took pity on me being up on the mountain alone, and he clearly did not understand that the whole point for me to go out in nature is to be alone.

Fortunately, despite his protests, i managed to lose him, at which point i met another chap from Guangzhou, who was a little more circumspect about his job. He was out there with an expensive DSLR taking photos and had me pose for a few. He said he used to be like me - just traveling around single and free. He worked as a journalist, but quit because (and i think i am translating this correctly, but because it was a sensitive topic i didn't push) he wasn't allowed to report on the stories he wanted. Now he is in private security. He was also on a work trip and said on Sunday he would be heading to the Nanhua temple near Shaoguan, which is a very important Zen Buddhist site, apparently.

It was fun to run into people and lose them again on the trail. I bumped into the photographer for a third time on the shuttle bus. (After 5 hours on the mountain with a bad cold and a heavy pack, i was in no shape to hike from the trailhead back down to the village.) I couldn't be bothered to wait for the regular bus to the city, so i jumped in a share taxi with a bunch of girls, one of whom i also recognized from smalltalk on the mount.

Reflecting on when i went to Hengsha 2.5 years ago, i was a bit nervous about jumping in the back of a share taxi with a stranger... But now i didn't think twice. The big difference is having confidence in the language, being able to be very clear up-front what the cost is and where the drop-off location is. He even pulled over a couple times to let us snap some pics of the sun setting behind the mountains. It was a nice drive.

When i got back to Shaoguan i took a gamble and booked it to the high speed rail. There were only a handful more trains heading south that evening, but since Shenzhen is the terminus for a lot of the lines i figured i might be able to sneak in. And so it was - the fastest experience i've ever had at a train station in China. No line, just waltzed up and bought a ticket for a bullet train leaving 15 minutes later. I was back home by 10pm and passed the fuck out.

I am still very sick and can't really think straight. I have spent literally every day this vacation at less than 100% and it sucks. I have to go back to work tomorrow. Trying not to think about it. Close my eyes, try to stay on the mountain. 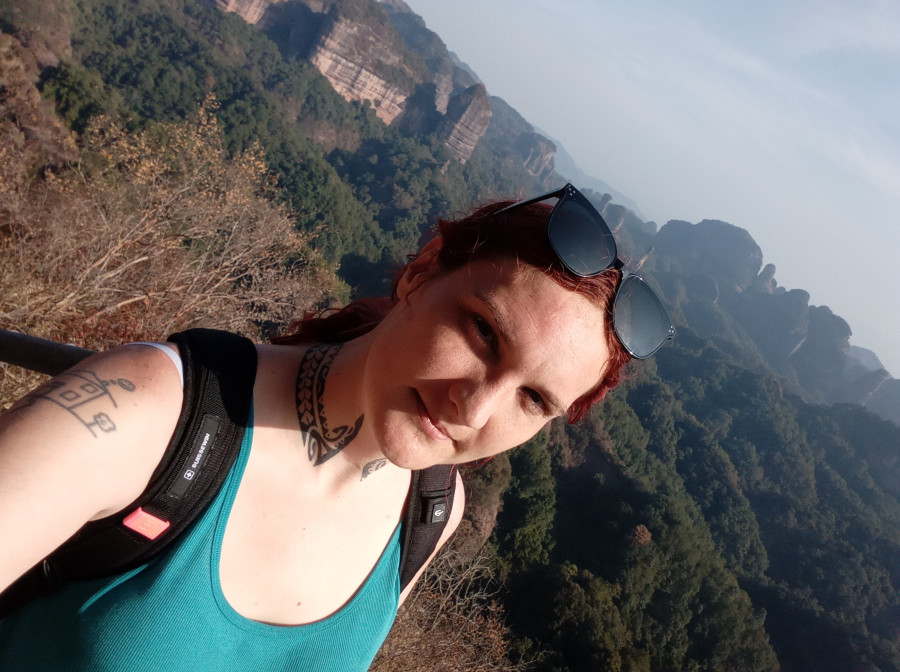