I was looking out the window Monday morning and noticed an unwelcome change in my neighborhood. The road out front of my house úsed to be two lanes each way. I'm not sure why, because all four lanes are nearly always empty, but it was nice because it meant buses or delivery vehicles could easily pull over without bothering anyone.

Since the virus hit, so many people switched from public transport to private vehicles that roads all over the city have become clogged with cars. During the lockdown people were illegally parking and double-parking all over the place, on roads that had previously only ever seen buses, mopeds and taxis. My road was no exception.

Well, if you take close look at the lines that were painted down over the weekend, you'll see that our wide open road just got officially turned into a parking lot. As usual, when the rich are inconvenienced, they just have the government change the rules. Most of the white cars are limos. The others are private vehicles. I suspect few, if any, are owned by people who live along this stretch of road. I wonder how much of the parking revenue will go to local people?

After coffee i packed a small overnight kit and jumped on a share bike. I wanted to bike out to the edge of the Mobike zone in Longhua district.

I realized that i couldn't bike directly east, because between my house and the train station is a bunch of factories and a stretch of expressway where pedestrians and bikes are not allowed. Unless i could blag my way through the industrial yards (not likely at the moment) i'd have to bike a hilly 30km detour around Yangtai mountain just to get to the same place that's 10 minutes away on the metro.

But the joy of sharebikes is that they allow you to switch modes on a whim. I jumped off at a metro station and went two stops due east.

The metro was real quiet. It's hard to tell if that was due to corona, since it is also a holiday and the line that i live on is one of the less busy lines anyway, but it sure seemed hella empty. I jumped out at the train station and took another share bike. The roads were pretty empty too. I resolved to check into every urban village along the way to see if anything was properly reopened.

Dear friends, not a single urban village was open to outsiders. One after the other after the other - all walled in, some with corrugated steel, some with bars, some with razor wire. The signs indicate that only residents are allowed inside and armed guards at the checkpoints enforce it.

Here are a few shots of the different barriers that have been erected. (Click to enlarge.) 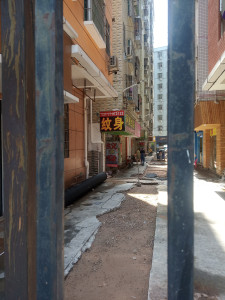 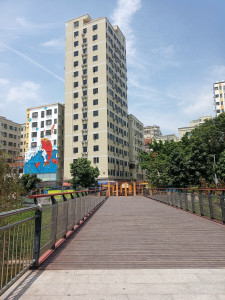 In some of the villages the enforcement seems less heavy than others. I saw a few people jump the fence, or enter a shop on the outside and then slip through a secret back door into the alley. As is the case in my own village, delivery drivers are picking up and dropping off food by meeting up with contacts on the inside and passing the goods over the fence.

I got a bubble tea from a shop on the outside, then pressed on. I found one of the Foxconn factories where rumor has it they make iPhones. It's massive. I chattered with the guards to let me in "so i can cut through to the other side" and they said i'd just need to sign in, add my face to the facial recognition database, plus leave the sharebike. The fact fucking Foxconn has less stringent security than urban villages right now is ridiculous.

I decided not to leave my trusty steed, and instead rode it down the river on a path running alongside the factory. Thanks to the "temporary" barricades blocking what would normally be a through route, this actually came to somewhat of a dead-end, where the only choice was to enter the factory complex from a different entrance, or cross a security checkpoint into another village. There were a bunch of workers coming out when i arrived, so i left my bike and snuck into the village with them. I guess not many outsiders come in that way because the guard didn't even look up from his phone.

I sat down in the village to chill for a bit. This is the first time since January that i have been able to go into a village that isn't my own. 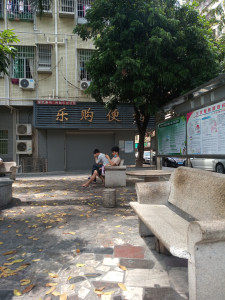 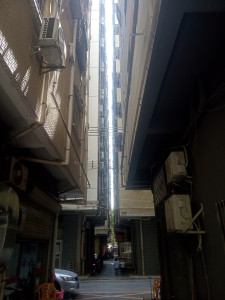 I pondered my next steps and decided to head out to a green spot on the map i had never noticed before. Once i sat down on the bus to google it, i discovered it was a fucking golf course. Not just a golf course, in fact, but some kind of massive resort slash gated community slash rich people exclusivity zone. I still tried to get in, but i should know better by now. The security guard just laughed and shook his head. This time i wasn't the only one misled - a young couple out for a summer walk also headed back up the road, disappointed that this "5A scenic area" apparently isn't open to plebs like us.

One day i'd like to get into one of these places just to see what's actually inside. I guess it'd just be a whole bunch of big houses, expensive cars and raging douchebags. This place even had a private school! Hilariously, the advertisement featured a bunch of uniformed white children and a coat of arms, like something out of Harry Potter. I looked it up later and turns out it's a local branch of a posh English boarding school. I mean... fuck this place, for real.

I followed the couple back up the road and then peeled off to the right where they went left. There was a grubby teen in flip-flops pulling on his cigarette and looking at the tattered job vacancies pinned up on the community bulletin board.

It had been a very hot day. I was stuck out on the edge of Shenzhen, beyond the invisible Mobike border, no sharebikes, limited bus service, most shops gone bust. It felt pretty grim. What to do?

Jump on a greyhound, that's what.

Thanks to the efforts of African diplomats, on Saturday the Guangdong authorities announced that businesses should no longer discriminate on the basis of country of origin or skin color. The fact this isn't already a law tells you all you need to know about the Party's priorities.

Guangzhou, i'll give it a miss. I jumped on the bus to Dongguan Shilong. This got long, so i'll finish the story tomorrow. Spoiler: i made it back to Shenzhen safe, sound and sunburnt.
Collapse