One of the things i love about electronic music is every time you go out, you hear a different song. A lot of it works off similar themes, a lot of structures are the same, but the driving force is: out with the old, in with the new. It's not new new, of course, retro nights are for sure a thing in the rave scene, and artists are constantly referencing one another, but the whole point is to make each night a new journey, a new exploration. If a DJ played two songs in a row that people recognize, they failed.

Indie pop is like this too, which is why it annoys me less than most guitar music. Every song sounds like the other one. They're all packed full of nostalgia, you're certain you heard it before somewhere... but probably you didn't. That's the trick! To make something sound old, but new.

Something else indie pop shares with techno is that the lyrics are almost completely unintelligible.

I'm thinking about music because i am sitting in the best bar i have visited since i left Berlin 3.5 years ago.

Yesterday i took a bike over Lions Gate Bridge, into the North Shore, over the Trans-Canada highway, up Capilano ravine, back down, along the docks, between the First Nations reserves, following the Spirit Trail, across the second bridge and back up through Vancouver downtown east side. 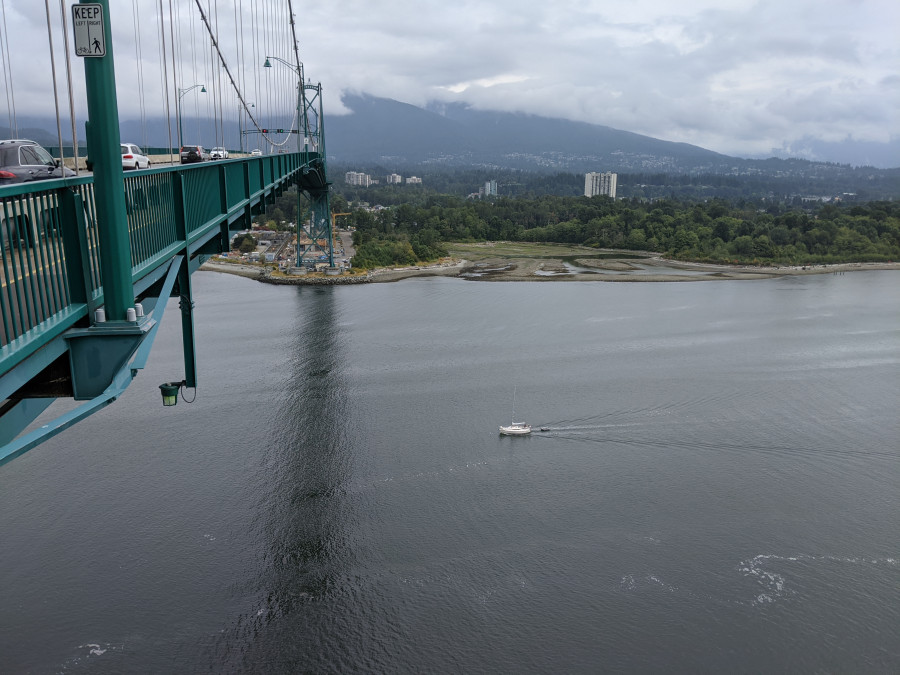 It was a 30km ride with some very steep hills. On the hills i realized i wasn't as fit as i thought i was. I also realized that riding a bike with gears is much, much less painful to do a long ride than the one gear wonders you get in China on the share bikes.

I tried to find tacos yesterday, at a taqueria in the middle of an industrial district between the reserves, no other restaurants nearby. Sadly, despite the sign saying they were doing takeout through the corona times, the doors were boarded up. In the end i just got a hummus and pita at some expensive hipster joint back in Vancouver West End, and the hummus tasted like cream cheese.

I went to the dive bar and watched the hockey with a bunch of hospitality and tourism workers, listening to their gossip about how much you should pay for a room in Vancouver, when or if Whistler is going to open properly in the winter, and the rich tourists who chartered their boat the other day.

Toronto came back from 0-3 down to win it 4-3 which sent the Ontario natives in the bar absolutely mental. Everyone had done a great job up until that point, staying safely in their bubbles, then one dude did a whole lap of the bar high-fiving everyone. So if i get corona you can blame the Maple Leafs.

Anyway i got a bag of popcorn to sober up and forced myself to go home early enough to sleep it off. Still had a hangover this morning but not enough to keep me down. I decided to go for a walk, because walks are great for hangovers.

I started by going downtown to try get more of my final month's salary out of my Chinese bank, but everything failed. They've probably blocked my withdrawals because of the currency controls, but i have no idea how to fix it. I was very pissed, but it's the weekend so there's no point getting annoyed.

After throwing up my hands, i set today's target as University of BC, across a bridge to the south, about 12km away.

I did grab hummus early on in the hike. The guy at the shop said "have you been here before?" I said no and asked if there was something special i should know. He said "this is the best hummus in town". I said that was an impressive claim, but you know what? He was right. At least, it was a very good hummus. It actually tasted like chickpeas and garlic which immediately put it above yesterday's. And it was topped with a ton of olive oil, paprika and cumin. I ate it on the beach. Y'all. Vancouver has so many beaches. Last time i was here i did a mini hike around Kitsilano and the museum, but the beaches go so much further. They're not all sand beaches. Most of the way it's rocks, and parts of it i think would not be navigable at high tide. There is a lot of wet, muddy, algae-covered ground that is extremely treacherous to navigate. I fell on my ass once. And it's tough as fuck on the knees. I'm glad i did it while i'm 40 because it hurt like hell already and i'm not sure i could do it if i were even more decrepit. I burst into tears at one point. From the exertion. From the wind. From the waves. From the freedom. No cops. Dear fucking lord no cops. But more than that, i was heading up to Acadia Beach, which reminds me of Arcadia Bay, the fictional PNW town where the game Life is Strange was set. I sat on a rock and looked at the sun and i felt like i could die right then and it would be fine.

I always felt the most at home on the west coast. Like. On one hand, the west coast is full of annoying hippies and stoners and it is so, so, so fucking expensive. They like to think they're super open-minded but compared to the east coast they're actually less diverse. But. But. The lifestyle is way more chill, it really is. There's something ineffable. Some vague, geared-down version of life that makes it feel homey to me, even i only ever lived here for one year, way the fuck back in 2002. It feels like a place to retire.

Anyway, walking along the coast i felt it again. Barefoot in the water. Sitting on the rock. I just let the tears come. Freedom.

I've always been an emotional basketcase in North America. In Europe and China i just lived my life, whatever. But here it's more complicated. My brain goes to strange places.

At a beach near the westernmost point where UBC is, i found a bar. There are no students. I don't know if it's summer break or if students are still out because of corona. But that is better. Less people, more peace. I love university campuses. I never went on campus (i got my degree through distance education while working full-time), so it feels special, a magical place surrounded by wisdom and learning.

The bar had a deck and i sat under the pine trees drinking a craft sour at a picnic table. They had vegan tacos. Not shitty tacos made by meat eaters with whatever fake meat or refried beans inside, but legit vegan tacos that have the kind of filling and texture and flavor profiles that vegans actually like to eat. Smoked sweet potato, pumpkin seeds, cabbage, pickled onion, cilantro, shit-tons of Valentina, or Tapatío. West coast as fuck. Did i mention i saw a dude with a guitar and dangling cock and balls collecting empties? Yeah it was a nude beach up this end. West coast, eh.

I figured out how to use Google Pay to pay and it's just as convenient as Alipay. That makes me happy. I'm at the bus stop now waiting for an electric bus back to the city. Life is fine.

Back in the West End. An empty lot like this in Berlin would be packed full of people with picnic blankets and beer. But in Canada you can't drink outside. For coronavirus they have loosened the restrictions a little bit, in selected parks, not this one.

That was also my MO in North America, especially California where you can buy alcohol anywhere. Find a good drinking spot. Share your drinks with a hobo. Sometimes they share their weed. I hate weed, but when it's a gift from a hobo i will oblige. I miss that. I think if i had been born here my life would've turned out very different.

I started smoking again. I don't know why. It always happens here. I always think about the end of Escape From LA, where Snake Plissken fires off an EMP doomsday device that destroys everything. All authoritarianism, all capitalism, all of modern society. The lights go out, and he finds an abandoned pack of smokes and lights one up. For freedom. End credits.