Monday i went to the bank to pick up my Visa and... it wasn't there. So i got a vege samosa for the road and went south.

Going south kinda sucked too, y'all. I walked along Main Street for a very long way. I decided to sit down at a small neighborhood diner to prep for the country. They had literally nothing that was vegan, except for just plain fries. I got a vegetable sandwich, which still came with a slice of cheese, but whatevs. It had artichoke, tomato, lettuce, cucumber and mayo, and it wasn't bad at all. Here's my thing. I'd rather go to a local neighborhood restaurant and not eat 100% vegan, than go to a chain restaurant and eat some plant-based whatever. Did ya know KFC is now doing plant-based in Canada? I will surely eat it at some point, when i am stranded somewhere without a local restaurant. But i would prefer to support local businesses, regardless of their menu.

Anyway, i kept walking south for a long fucking way, and it was the same miserable shit that i experienced walking east. Just miles and miles of houses. Main is slightly less shit than Hastings, but i still wouldn't want to live too far south because there are no apartments, very few parks, and very few pedestrians.

I started walking east toward a cluster of skyscrapers i had seen the previous day. Then cheated and took a bus because i have blisters from walking too far. I popped out at Metrotown, which seems to be a pseudo-downtown of Burnaby, the city next door to Vancouver.

When i looked at the map before i arrived in Canada, i thought Burnaby might be a decent place to live, because it is marginally cheaper than Vancouver and has good transit links. But it is one huge, horrifying suburb. Even the skyscrapers are a tease.

The Metrotown skyscrapers are built in the Chinese style, which is the worst possible way to build skyscrapers. Condos with shopping malls underneath. That's it. Everyone drives a car, or catches the bus. I literally saw people catch a bus to cross the road, because the roads are 27 lanes wide and epically pedestrian unfriendly.

It totally defeats the point of highrises to put them next to shopping malls. Why would you even bother living in an apartment if it's not a walkable neighborhood? And, if the only things you can walk to are the same shitty things you could walk to from any terrible suburban neighborhood anywhere in the world, what even is the point? McDonalds? Starbucks? The fucking worst. The absolute worst.

I did find a nature park nearby, which had big signs up saying that bears were prowling. That totally killed my excitement for the park because i don't go to a park to get mauled, i go to a park to hike. Of course there were fucking one-way signs. Can't walk this way. Must walk that way. Coronavirus, eh. What is this bullshit? Fuck Burnaby.

Here is a picture of Burnaby. It is a fucking swamp. Anywho, i went back to the city and got Korean tacos. I did spot the greatest building in Vancouver. Brutalist with bushes. I was kind of distraught after the second sad excursion to the suburbs, so went to the dive bar and proceeded to get very, very drunk with some folks who just got back from camping and did not social distance at all. Couple of friendly kisses and hugs, no tongue, i hope i'll be okay. I turned down the offer of going "back to my place for some coke" because i am a very responsible person.

Tuesday morning i had an abysmal hangover, so i picked up my Visa and headed to the SeaBus to go back to North Vancouver, which is the best place i visited in the city. See, North Vancouver is the kind of suburb that i understand. It is right next to the countryside, so there is a reason to live there. It's a fair walk to anywhere civilized, but you can at least walk to the nature parks. That makes suburban life okay. Suburban life where all you can walk to is more suburbs fucking sucks.

Of course, North Vancouver is insanely expensive and only very rich people and a few First Nations live up there. Also a lot of frugal RVers parked out the back of the docks.

I walked to a vegetarian restaurant i spotted during my previous travels and got a rice noodle with peanut sauce and some other stuffs. It was expensive, but good. Fresh and healthy but also heavy enough to numb the pain somewhat. I sat on the beach for a while and chilled before heading back over the water to the train station.

The subway is running, and the commuter rail is running, but the trans-Canada trains are not because of corona. So the main train station is closed up and the only people there are homeless folks. I walked down to Chinatown to get a bánh mì, then walked back up to catch the night bus to Calgary.

The bus was booked one person per two seats for social distancing and everyone masked up. We headed through the shitty-ass swamp that is pretty much all of Vancouver's outer suburbs, then hit a brief spot in the country that looked kinda nice. 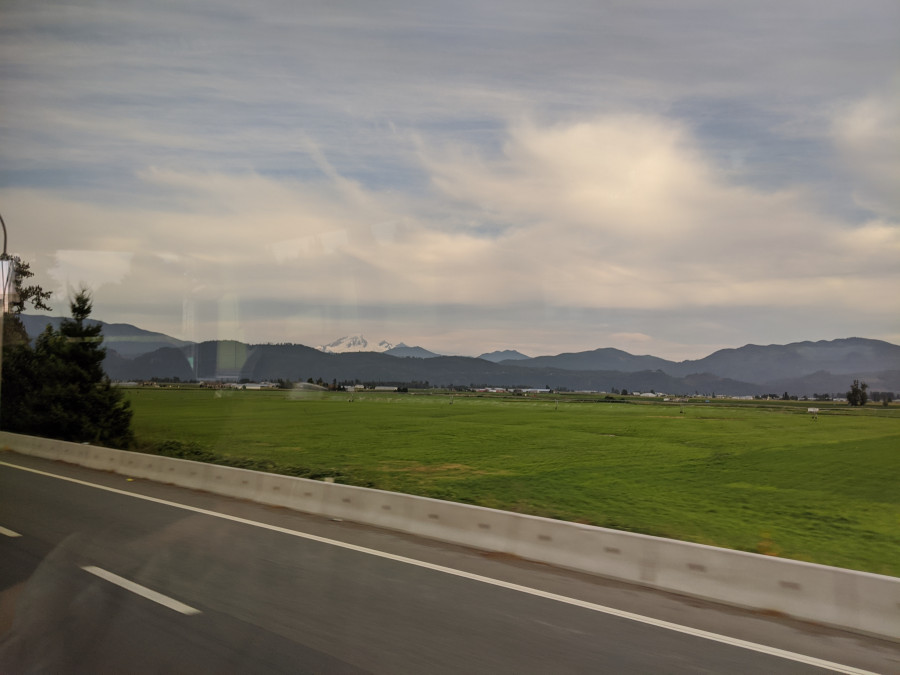 Dude, is that Mount Baker? Like, in America? I guess it is.

After the brief rural interlude, it went into claustrophobic cliffs and trees and waterfalls and darkness. I mean, the sun went down, so it was dark. But it was dark way too early because the Fraser Valley gets real deep in there.

I do not like that kind of valley. It feels like the world is closing in you, the sun never comes out, it's cold and wet and i am sure there are at least 7 serial killers per square kilometer.

I had picked as my destination Kamloops, which pretty much everyone says is the worst town in BC, therefore i had to go there. It's known for being a "desert" (only by comparison to the soggy mess that is the rest of the province) and full of rattlesnakes and rednecks.

The bus dropped me at a truck stop a few kilometers from my motel. It was well after 10pm, but i shouldered my pack and walked the frontage road. There were a bunch of scary noises coming from beside the road, but it was probably just sagebrush rustling in the wind. Bunch grass, strip malls and boondockers. Y'all, this motel is the best place i have stayed in years. I wish i could live my whole life in a motel, they are perfect for my lifestyle. Lotsa old folks living the dream. But i will talk more about that later. Suffice to say that i am safe and sound in the countryside. I spent way too much time walking along roads with no sidewalks, but i got a proper nature hike in too. Kamloops is pretty great, so far. Tomorrow i'm heading downtown to try meet some people who aren't just passing through.
Collapse