I was going to go out for a quick bike ride today, but something very strange and alarming just happened. The world started closing in and i went into an odd déjà vu state, like i was very high on drugs, then i went to the bathroom and sat on the toilet and i couldn't breathe. I tried to get air into my lungs but it wasn't enough, then i blacked out. When i came to, i was standing next to the bed with my pants and bra off and my heart going million miles an hour.

I splashed water on my face. I discovered a painful bump on top of my head. I went out to the balcony and opened the windows to try breathe in some fresh air. Then i drank about 2L of water.

I'm feeling a bit better now, but i think that i might have had a seizure. Now i don't want to go anywhere, because i don't want it to just randomly happen on the street.

I am hoping that it was just a once-off. It's never happened to me before, nothing that intense. Maybe i got a concussion yesterday when i stacked it off the bike. Maybe i need to really fucking quit smoking again. God, maybe i should stop drinking?

Let me share some photos to try get my mind off things.

A couple days ago i took my bike along the River Trail out west, past the airport. In the city it's just a regular bike path or a marked route going through residential streets, but at the edge of the city it turns into a gravel path on top of a dyke. It feels very BC Interior to have bike paths turn into gravel. There were a bunch of tire tracks from fatbikes, and my hybrid was probably about as "city" of a bike that you could take down there.

In sections you could leave the gravel and head into full-ass mountain bike trails, with sand underfoot, tree roots to dodge and grass overgrowing the path. When i was a kid i did a lot of urban BMX style "mountain biking", like through a construction yard or taking a shortcut down a steep hill, but it's got nothing on biking down a legit rural trail. I always thought mountain biking was yet another douchey wilderness sport for rich people, but actually in a small town like this it's totally accessible, you just cycle out past the last house and there you are, mountain biking. Neat.

I got a view of a beautiful mountain i think is called Cinnamon Ridge. There is a hiking trail that goes up there, but i wasn't sure where the trail head was. Biking back along the main road, i caught a train coming in. Dude. Let me talk about trains for a moment. Kamloops is a freight hub, and i cannot stress how cool it is to live in a building that is a stone's throw from the main line. All hours of the day and night, you can hear engines thrumming and rolling stock shunting and smashing into each other. It is the most comforting background noise of anywhere i lived. I only really experienced the freight rail sounds a few times before in my life, most recently near motels in Rapid City SD and Helper UT. At this crossing, i waited about 20 minutes, and the train was still going. It's just awesome. It is the coolest fucking thing in the world, i think even cooler than traveling on a freight ship. I wish i could buy a place that backs right onto these tracks. I'd retire and watch trains all day. I dreamed all my life of being in a place like this.

Anyway, it seems the trail head might've been on the other side of the tracks, but i was tired anyway so headed home.

Fastforward to yesterday, when i decided to head north. I had literally just left the house, 2 minutes down the road on a separated bicycle path, when i went over the handlebars. I have no idea how the fuck it happened. I didn't hit anything. I must have smashed the front brake, i guess, but i don't know what the fuck. My knee was busted up, and my palm and my legs. I pulled over to a flat spot and checked the bike. The wheel was misaligned, which i'm not sure if that happened because of the crash or if it's what caused it, but i reset the wheel and headed on my merry way.

Following the River Trail north was a similar experience to going west - regular bike path, shared residential streets, then gravel on a dyke. I boldly took a side-trail to ride along some hard-packed sand right next to the river and it was great fun. Back on the road, i hit a new development full of what i am sure are million dollar homes. Out front they each had - at least - one RV, one boat, one truck and one "fun" car like a Jeep or a Corvette. Who the fuck can afford all that stuff? It was a stark contrast from the trailer park located on the flood plain just behind the dyke. There was a strip mall located nearby, so i stopped to buy a peach tea for energy and a can of beer for relaxation.

It was very hot.

I decided to cycle off the trail and up a hill where there were a bunch of even more expensive-looking houses, just to see. Of course it was a private road up there. But just before the "drive past this point and you will be towed" sign, there was a BC Parks sign, so i chained my bike up to the sign and decided to hike for a bit.

Turns out the fancy development backed up to Lac du Bois Grasslands, and one of the shorter trails went parallel to the road and into the hills behind.

It was pretty cool looking down on these cliff-side houses with, like, a walled basketball court and stuff. Let's be honest, if i was a millionaire, i'd probably live in a house like that too.

It is funny, though, because in China the communities up in the hills and around the hiking trails are the poorest and shabbiest. I remember finding that surprising when i went hiking there. I think it might be because sloped land is hard to build on, hard to grow crops and hard to connect to city services, so the government just left the clans and villagers to their own devices while they developed the shit out of all the valleys. I suppose that'll change when rich Chinese realize that sitting out on the edge of nature with a cool view is better than living in a resort-style gated community with a bunch of other rich families.

I headed up the hill. 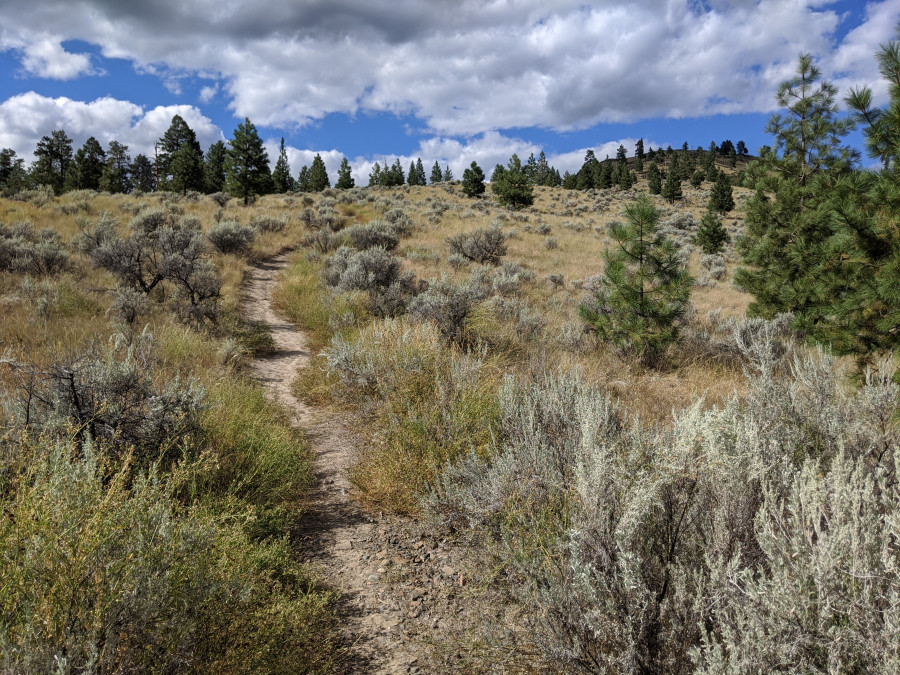 The land was pretty barren out there, which is my favorite. It looked like what few trees have managed to grow there over the years have been hit by lightning or fires. I'm very conscious of bears and lions being out in the wilderness in Canada, and i am shit-scared of even herbivorous critters like deer and cattle, so i picked up a couple of large sticks to wave around. Fortunately the only mammals i encountered were cute prairie chipmunk-type things. The insects were insane, though. There are dragonflies and moths and weird jumping grasshopper-type things that make a clicking noise. And they're everywhere. Somehow i don't find it disconcerting, even though they constantly jump all over you. Something about dry insects feels less bothersome to me.

I really am more comfortable in the desert.

Anyway, i did make it to a little mountain lake, which was my turnaround point. On the way back i sat down in the shade of a tree and enjoyed my beer.

From the trail head it was another 15-20km ride home, against the wind. I got in after 6pm and was utterly spent. I cooked up a meal, drank some alcohol, watched some wrestling, then passed out.

This morning i took it fairly easy, but that little episode has me thinking i should take it EVEN MORE EASY. Yesterday was a long adventure in hot weather with relatively little water, plus i was injured, so yeah. I need to recover.

Fortunately i have plenty of food in the fridge and plenty of shows to watch. I think cooking some dinner is exactly what i'll do now.