I'll open this entry by saying i have recovered somewhat from whatever it was that caused my blackout the other day. I spent a few days inside, not drinking, not smoking, just resting. Then i slowly restarted that stuff, and some exercise too, and yesterday i did about a 50km ride along the river so i think i'm back to normal, plus a few scrapes and bruises.

The time off got me thinking about things.

Since i got to Kamloops i've been pondering what to do with mom's inheritance and also my life in general.

One thing i was doing was looking at apartments and mobile homes in the area. I can't afford a real house, but even if i did have one i wouldn't know what to do with it, so that doesn't matter anyway. I will never get a loan, so anything i buy has to be cash.

The kinds of places i could afford are so-called "micro-suites" in new condo buildings, which are basically the kind of place i lived in China - one bed, one shower, one toilet, and a tiny kitchen. That would be perfect for my lifestyle, except for the fact that condos charge you money every month, so actually it's not really rent-free at all.

Mobile homes are the same deal. I could get a delapidated single-wide, which is more home than i could ever hope to know what to do with, but even fucking mobile homes you have to pay pad rent. Plus a lot of the trailer parks here don't have long-term pad rental because the owners are trying to get people out and sell the land for condos.

I talked to my old friend M back in Ontario who had to move out to a trailer (like, an actual towable trailer) with her kid after getting kicked out of her boyfriend's parents' place during lockdown. Her trailer park is closing down for the winter in September so she is trying to find a cheap house in an outback town so her kid can go to school. She's invited me over to stay there when they get a place, but up in northern Ontario where she's looking the winters are fucking brutal.

I also talked to my friend R in Windsor who invited me to stay in her place for the winter. Condos in her building are going for 300k now and she offered to go halves in a condo so i have a place of my own, and also an investment sitting there when i leave. No doubt it's a decent investment - her place has gone up to 300k from 175k when she bought it a few years back.

But. I can't. I start looking at all these houses and i think to myself... i can't. I don't want all that paperwork. Even buying with cash, you still need to pay property tax, condo fees, utilities, upkeep. I like the idea of owning a little base somewhere that's mine, but the practicalities of it terrify me.

Dude, even the idea of owning a car terrifies me. I've also been looking at getting a vehicle. I've looked at full-blown RVs, truck campers, truck trailers (aka caravans, for the Brits), trucks with a camper shell, SUVs and hatchbacks where you can set up a mini platform to sleep in. And, although i do like the idea of being able to drive around wherever - certainly to far more places than you could get to with a bus - they are just a never-ending money pit of registration, insurance, tyres (in Canada it's mandatory to have both winter and summer tyres), tune-ups, gas... Paperwork, so much fucking paperwork.

I could almost justify a vehicle if i lived in the US and was able to drive down to Cali or Nevada for the winter, put out solar panels and do my best to live off the grid, but in Canada you're looking at very serious fucking snowstorms in most of the country, or endless rain in the tiny corner of the country where it doesn't snow. Neither of which is good for vehicles, especially not if you're trying to live in one.

Most homeless people in Canada try to find permanent shelter in the winter. Hardcore drifters go to Victoria, which is a town on Vancouver Island where it doesn't snow and apparently there are lots of shelters.

I'm not a homeless person, but i think my mindset is more homeless than homemaker, somehow. The first thing i did when i got into this house was lay out all my stuff and pull out a bunch of shit for donation that was making my pack too heavy.

I am still carrying around a very hefty stack of paperwork, but having gone through immigration a bunch of times i know that i may need to present all this stuff: proof of residence in different places, proof of education, proof of employment, plus tax and social security info from every country. I think if i stay in Canada for a while i will find a place to store that stuff, maybe a bank deposit box.

All of this shit has been going through my mind from the first day i got out of quarantine, and buying a bike - the first time i've owned more stuff than i can reasonably carry with me since 2013 - really punched me in the gut. I kept trying to justify to myself buying a car or a house or whatever, spending hours browsing all the different articles... I was working myself into a pretzel of stress and anxiety. Now i have let it go. Just mentally accepting that I DO NOT WANT ANY MORE FUCKING STUFF has taken a weight off my shoulders.

I am not the person who can own stuff. I just am not. It makes me so stressed out and unhappy. I feel trapped.

What i really love about having a place of my own is building a kitchen. This is literally the only shit i want to spend money on. 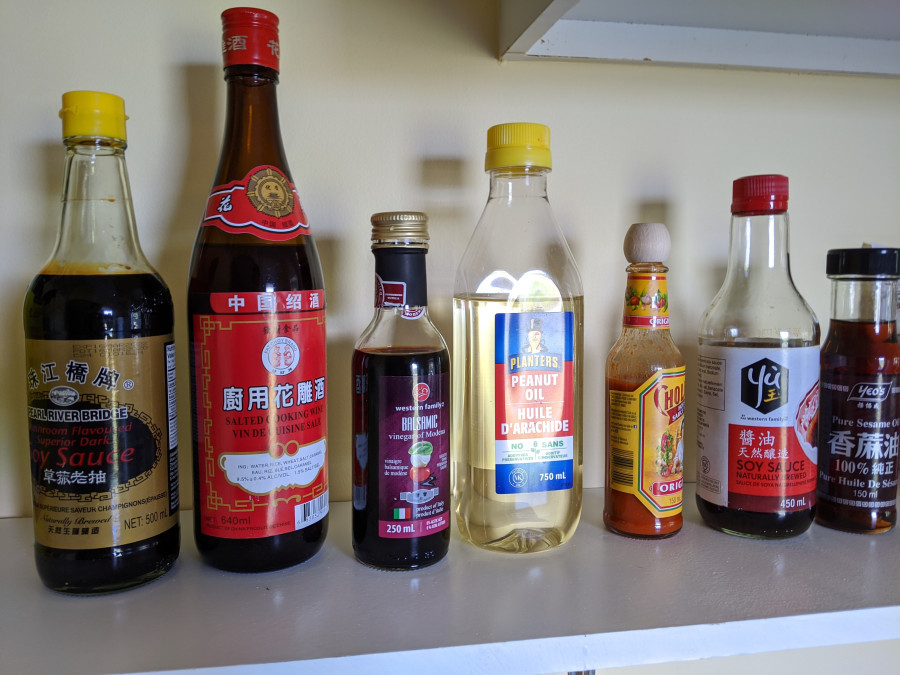 The other benefits are "free" running water, flushing toilets and protection from the cold. That's it. Everything else in the house is too much stuff.

A couple days ago i took a short trial ride west along the CP rail line till the road ran out and the train kept going. It's just industrial sites out there, and a nude beach. 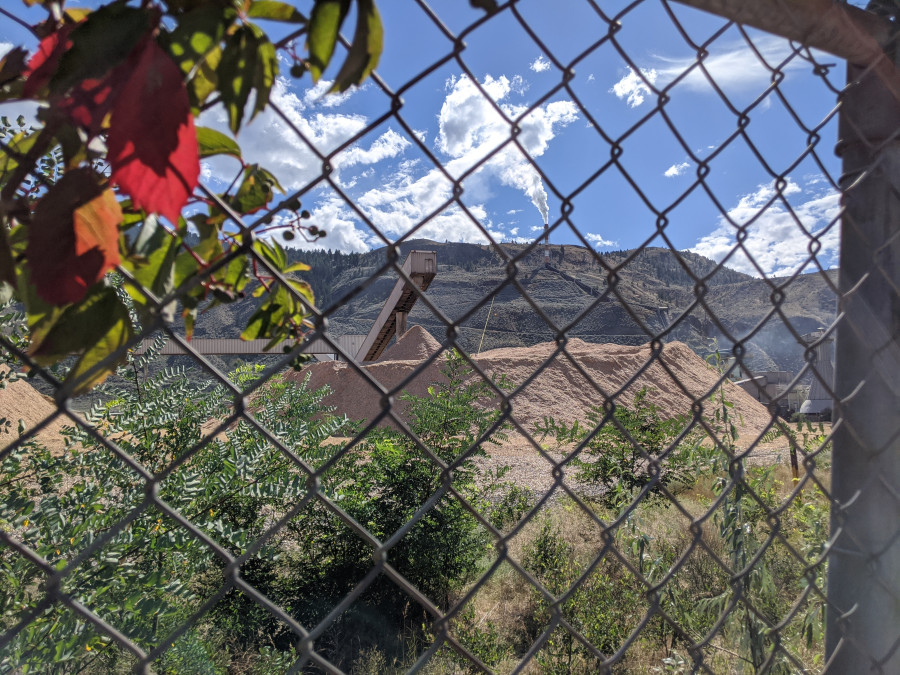 The path to the beach was blocked by a pipeline protestor on a vision quest: https://www.kamloopsthisweek.com/news/tk-emlups-man-staging-fast-vision-quest-in-opposition-to-trans-mountain-pipeline-expansion-project-1.24193605

I considered going up to the tent to ask if they needed anything, but seeing as i was on a bike and there were a bunch of trucks parked out front i figured they had everything they needed.

The pipeline is everywhere here. Everywhere i bike there are work sites with lots of white trucks and guys in high-vis vests. The security is epic. There are loads of no trespassing signs and razor wire fences. Same on the railroads, there are police constantly driving up and down looking for hobos. Gotta protect capitalism, eh, at all costs. 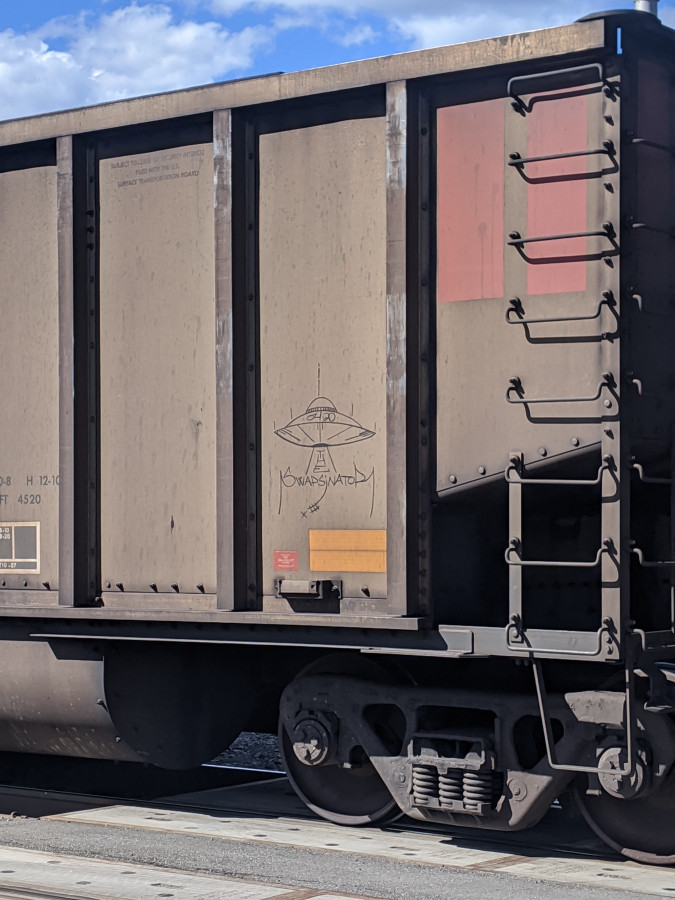 Yesterday i biked out east, heading for a bridge about 20km out of town. There are a bunch of suburbs out there. The desert valley is getting overrun with giant, cookie cutter houses full of people who can afford to park three vehicles in their front driveway and burn fossil fuels every time they go shopping. When i crossed the river it was ranch land. 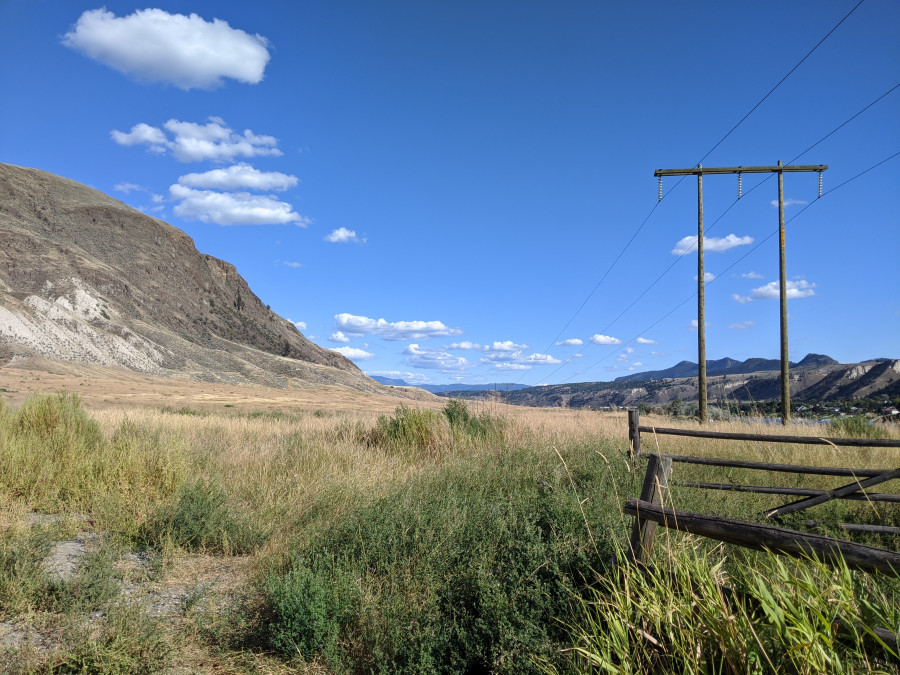 Cycling along the ranches i realized that cattle guards suck for bicycles. I also realized that even though the road was reasonably flat, cycling against the wind fucking sucks. 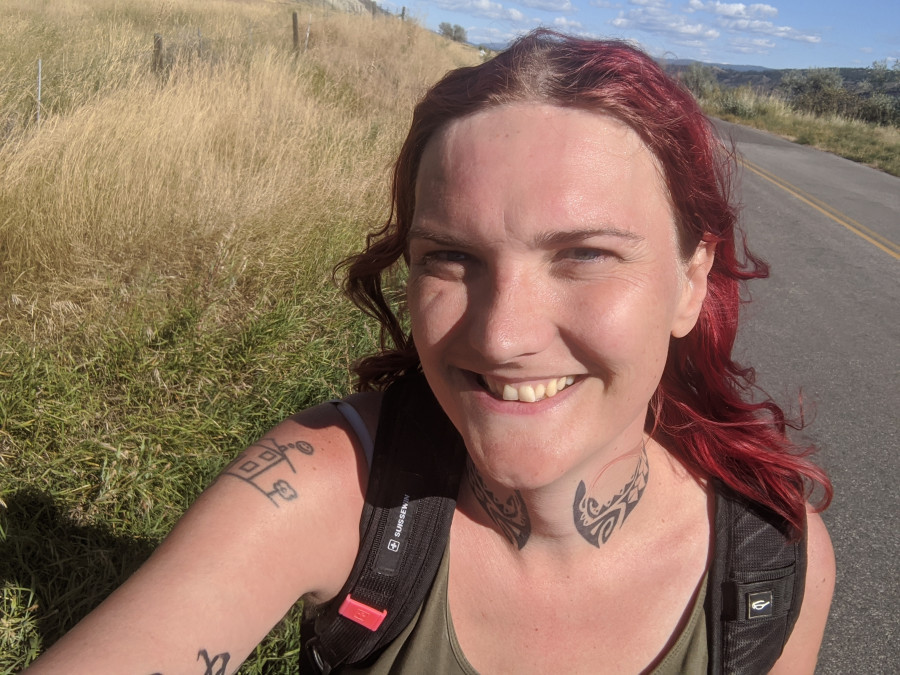 Fortunately i had picked up some ice tea and another liter of water at a gas station way out along the Trans Canada Highway. 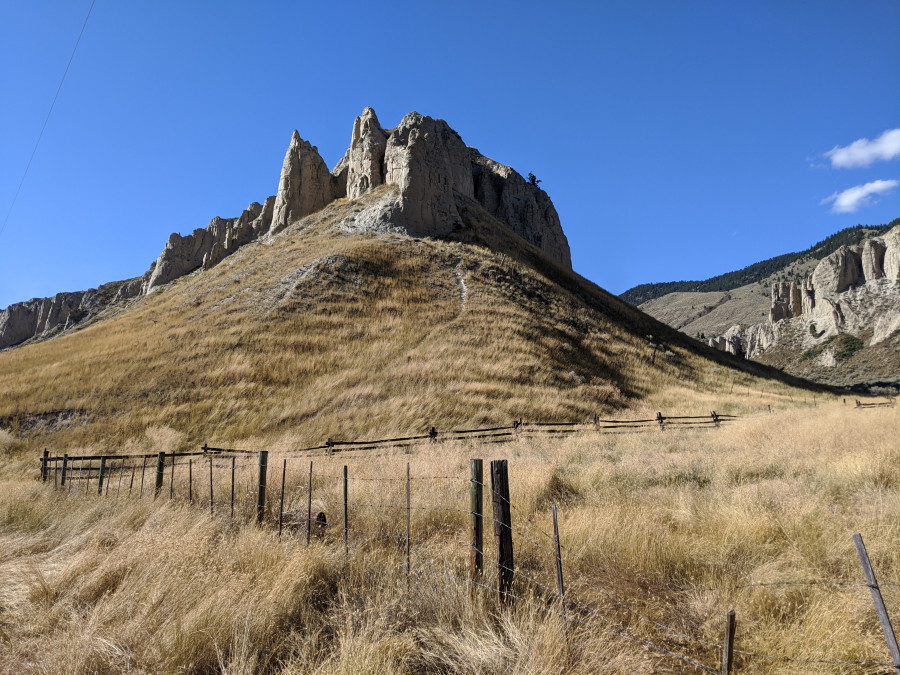 It was much nicer cycling along the ranch roads than the highway. Not many cars. Great views. When i got into the Indian reserve i started seeing gated communities. I guess the tribe figures giving a 70 year lease (or whatever it is) to property developers building cookie cutter houses is a nice chunk of income. Those houses go for like half a million or more. Fucking... the people who can afford to buy places like that, on land that's leased from the reserve, i don't even know buddy. That's truly frivolously rich.

It was a good ride. I'm back home now, and still pondering what to do with my life. My landlord has offered some small (paid) yard work for me to do, which i'll be fine with. There are a bunch of homeless shelters around here which are looking for volunteers. Last time i came to Canada i volunteered for a while, at a gym that had a program for survivors of domestic violence. I like the idea of volunteering, but also i feel like it ties you to a place, you start having a schedule, you start getting to know people. I feel so uncomfortable with that aspect of it.

I like it here and could totally see myself living a good life here (if i could find a bit of work), but i'm on that drempel where it feels like... i can see why staying would be nice, but also i don't want to stay. Not because anywhere else in Canada is sunnier or better, but because i just hate the idea of getting stuck. I fucking hate "real life". Fucking. Working. Fuck. It's the worst. 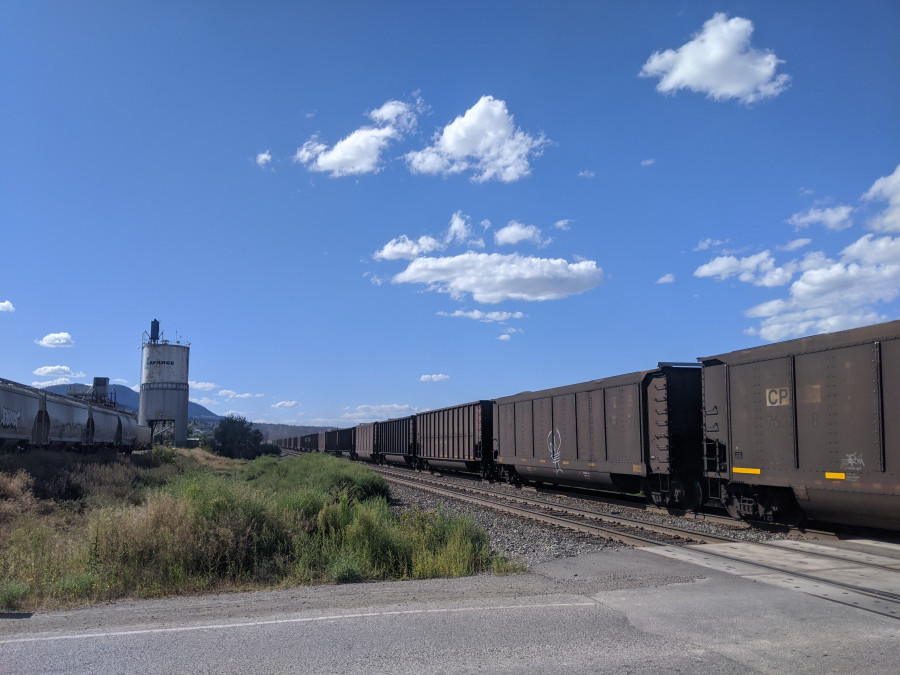 Then again, taking a leaf from actual Canadian vagabonds, you gotta find somewhere to hunker down for the winter, otherwise you will die.
Collapse