What have i been up to lately? Well not a real whole lot since the smoke rolled in. For several days it was so thick it hurt my eyes and throat just to be outside, plus the sun was blocked out, so there were no walks or bike rides.

One thing i did decide to do was book in some dentist appointments. The corona outbreak is getting worse again in Canada so i figure i have a short window where i can do elective medical stuff before they shut it all down.

Also, i haven't been to the dentist in a very long time. 5 or 10 years, probably. Last time i went they did an X-ray and told me i needed a filling. I didn't have the time or money for it, so i just got them to do a clean and leave it at that.

I don't have any fillings. Everyone in my family has terrible teeth that were riddled with holes by the time they were 30, but that never happened to me. I think it's because i rarely eat sweet food.

Anyway i went in last week and they told me i have 3 cavities that need to be filled. When they described what a filling actually is - cutting off a whole chunk of perfectly healthy tooth, then recreating the discarded tooth-shape with magic goo - it made me even less keen to get one. I thought it was just an injection or something. My adult teeth have served me well for decades, so excavating and replacing large portions of them seems like a step backwards. I'm also worried i'll get roped into a lifetime of maintenance fees, as they inevitably come unstuck or worn down and need to be replaced.

But, after i gave it some thought, i booked myself in. On one hand, i am still skeptical that giving me cyborg teeth is going to actually be stronger and better than my original teeth, given how many people i know who seem to visit the dentist more often than the fucking grocery store. On the other hand, given that right now i have no job and a comfortable sum of money, it is also the best possible time to get something done. I could gamble that the cavities will never start hurting, but if they do start hurting when i am broke, then i will be pissed that i didn't do anything now.

Another interesting thing happened during the last of the smoke days. A family of deer decided to come into the back driveway. I am not a fan of animals. All animals. Wild animals, pets, cattle, they're all equally shit. I have no problem with them living off in the distance somewhere, but they creep me out when they get close.

Toward the end of the smoke, i decided that i should try to occupy some of my retirement days with something constructive. So i bought a harmonica, which is probably the most portable musical instrument that isn't electronic. I love electronic music and nowadays you don't need anything more than a phone to make full-fledged songs, but there is something nice about an instrument that you can fit in your pocket and play anytime without worrying about battery life.

Dude. Harmonicas are hard. First of all, it's the first time i've ever played a diatonic instrument, which is muso jargon for instruments that can only play one scale. If you're thinking piano, think only playing the white notes. Which is to say, the most boring notes. But there are tricks you can do to make it sound slightly more interesting. Those tricks involve a crazy amount of tongue, lip and throat control. Currently i am still figuring out how to play one clean note at a time, using the major scale, Frère Jacques and Oh! Susanna. I assumed i could just pick it up and sound like a bluesman since i can already play decent guitar and keyboard, but actually getting good with the thing is going to take a long, long time.

Still, it's kind of neat to just walk out to the back of some industrial lot or lean up against the fence at the rail yard and toot around a bit.

The other thing i did was set up a fucking yard sale. My landlord is busy trying to get rid of all her and her family's stuff so that sometime next year they can sell the house. I've never been to a yard sale before, and the reality was pretty much exactly like what you see in the movies.

People started showing up first thing in the morning while we were still setting up. All the early birds knew each other by name, presumably because they frequent every yard sale in town. Inexplicably, people spend actual money on what is essentially trash. There were no antiques or anything. All the stuff was the sort of thing i would either throw out or donate/freecycle. But folks are happy to pay a couple dollars for a weird candlestick, or for some mismatched plates, or whatever.

I think yard sales are almost more of an excuse for socializing than actually making money (or buying useful products). My landlord and her sister chipped in with the stories behind everything, reminiscing about mementos brought back from trips overseas and relatives who had passed away. Such a different world from mine.

We still had lots of things left unsold. Some friends of the landlord hauled it off for donation the next day. I got a six-pack of booze for my troubles.

So, that's about it on my end. Even though the smoke cleared up, the weather is now cold, by my standards. It's under 15°C overnight and even during the day it's under 20°C which is way too fucking cold.

I have discovered, while sitting on a piece of cardboard in the rain, that cold harmonicas don't play properly. Your breath causes too much condensation, so you gotta physically warm the thing up to get it to sound right. Acoustic instruments, i don't know man...

I finally got my divorce certificate in the mail, and my BC drivers' license.

This is my boring life. Sitting on an upturned bucket watching the trains go by. Playing harmonica. Poorly. 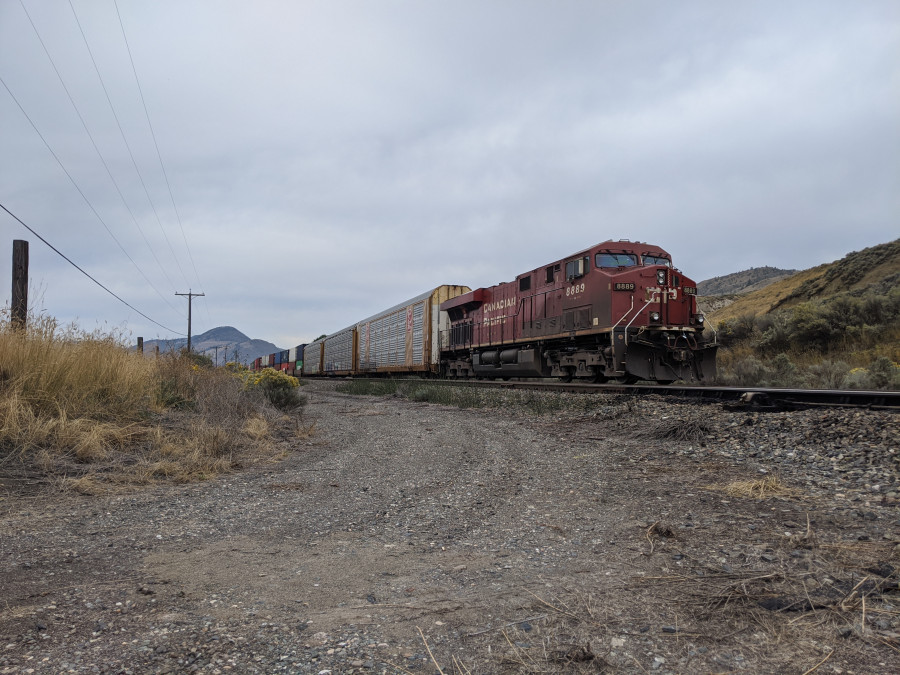 Tomorrow i get my teeth drilled. Hooray.
Collapse