Today it was sunny AF. Like 28 degrees. Finally, finally winter is over. I went down to the liquor store and then the grocery store to buy some supplies, then resolved to go for a bike ride.

On the way out the door, my landlord said hello, and it seems she has broken her foot or her ankle or something, and will be in bed for 6 weeks. Her family was all there, and i didn't want to crowd around because corona, so i don't have any further details. Stay tuned, i am sure i will hear more goss in the coming days.

Then i headed up the river and out to the freeway. I wanted to get away from people, so went through the rez, and was very disappointed to find that one of my prime empty lots where i spent a lot of time sitting around last year has been fenced off. They haven't built anything there (yet), just fenced the whole thing with razor wire. How much of an asshole do you have to be when the very first thing you build on an empty lot is a razor wire fence?

I guess, how much of an asshole do you have to be to build a fence at all?

Fences, walls. They do nothing but divide society.

Anyway, so i couldn't cut through the lot, and had to find another path around it, then crossed the bridge, past the CN rail station, up the freeway, and i paused up near a little field to drink some water and play harmonica. 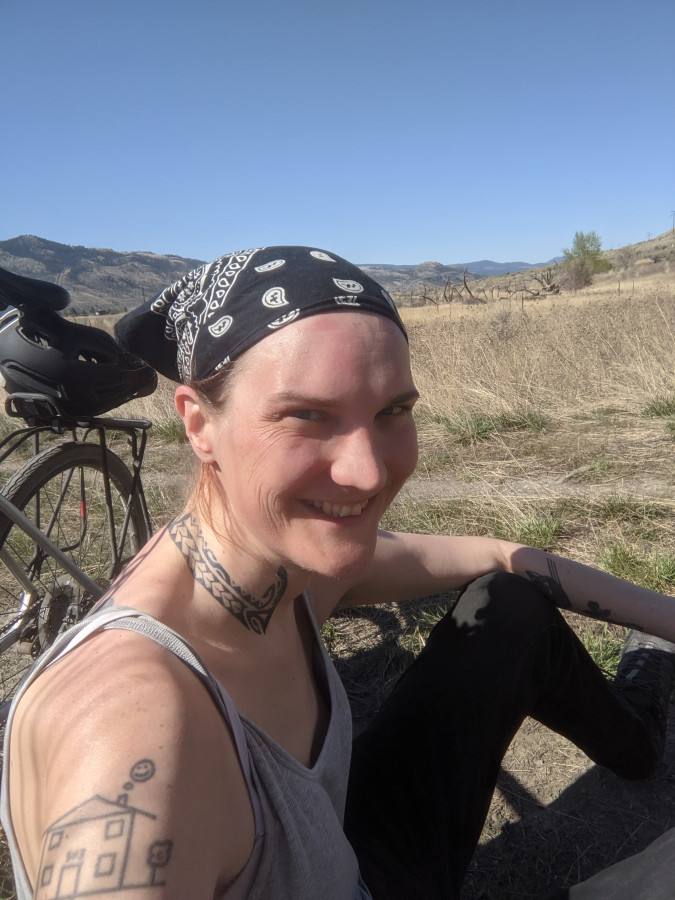 After 45 minutes of baking, i headed to the community upriver that has a liquor store and a bar and that's it. I decided it'd be a good spot to have a beer, so i masked up and signed in. There's no indoor dining since the new lockdown came into place, but patios are still okay, so i headed out there to sit at a table and nurse a couple bottles of Old Style Pilsner.

The only other people there were four bikers nattering on about the process of getting the vaccination. They mostly seemed to be retired, likely with a bit of cash since one of them was talking about buying a 350k property nearby. I could sense the relief in the voices of the two who had gotten the vaccine.

The chatter right now is Ontario, which is the province of Canada where Toronto is. It's also the province run by "Canada's Trump" (or "Canada's BoJo", take your pick). Ford is a populist who heads up the provincial conservative party and cultivates some kind of huckster everyman schtick. Like, one of his campaign promises was to bring back the good ol' days of "buck a beer", $24 for a 24 case.

He completely clusterfucked corona, with the typical populist thrashing about between maximal lockdown, total unlock, maximal lockdown again... Literally in the last 24 hours he first announced not only checkpoints at the border, but also police checks on the roads and fines for anyone going outside without a reason, then (after the predictable outcry) he rolled that back, then rolled even more restrictions back, and now no one knows what the hell is going on. One thing everyone does know is that the hospitals are overflowing and field hospitals have been set up and doctors are talking about Toronto 2021 being at risk of becoming another NYC 2020.

Anyway, over here on the west coast we talk like Ontario is another country, which it almost kinda is. Different leader, different health care system, different climate, different everything. And now there are border checkpoints between the provinces too, so we're all in our bubbles. But then someone must've felt a bit bad dumping on our kin, so they changed the topic to dumping on America. One money quote was the guy who said that with Trump "America finally showed their ass to the world, now everyone knows what we all been knew forever". That's probably underestimating the anti-American sentiment outside of this hemisphere, and anyway dude was wearing an all-American Harley-Davidson shirt, but hey, it's a bar, this is bar chat. You gotta find some reason to dump on your neighbors, that's part of the thing.

God i missed bars. So much.

Later on they left and someone sat at a table near me. I think she might have been French Canadian, or perhaps Métis, not sure. Hailing from the Kootenays, she referred to herself as a gypsy. The past few years she's lived on a houseboat in the summer and she snowbirds down in a small town in the Yucatán for the winter, but this year due to the pandemic she saw the winter through in a cabin about a half hour drive out of our desert town. We talked about traveling, both the hobos and RVers here in North America, and the international travelers who do WWOOFing and seasonal farm work all over the world. It's all changed now for them, with corona. Everyone is stuck. Everyone is going stir crazy, but travelers surely most of all.

She showed me pictures of her Caribbean paradise where she snowbirds and it made me long more than ever to get into the sun. She said she hates the resorts where people need a key to get in, a key to get out, she prefers to just live in a simple apartment in a small town. No fences, no walls. You and me both, mama. Anyway, yeah, it made me want to learn Spanish and fly south. I mean, well, it's sunny AF here right now. But i'm thinking ahead. I don't know if i can do another Canadian winter. It's the worst.

Just being out there with the sun on my face, feeling my skin heat up, that's living. It's like a completely different me.

She offered to give me a lift back in town, but i said i'd bike it. You gotta go the whole way!

Coming back into town, i passed through that area where on one side of the road you have trailer parks, and there are drug deals going down, and the homeless are huddled... Other side of the road, some overpriced craft beer place full of small town hipsters packing the patio to the fucking brim like COVID ain't no thing. I am so glad i biked out to a rural bar for my tipple. Probably better conversation too.

Anyway, i'm home and i am probably sunburnt and it feels fantastic. I need to cook but i don't want to. I can smell everyone else's BBQ, and it makes me want to eat a sausage. I have a vege sausage, but it won't be the same cooked on a hotplate. Perhaps i will make a burrito instead.

Either way, i will certainly continue drinking, and imagining my Caribbean getaway, and that wonderful future when people are traveling freely again. Freedom of movement, it's the most important freedom. I feel sad for my Ontario friends. I hope it doesn't get that bad here.
Collapse