I am in a strange weekend limbo.

For the past two weeks or so, little packages have been arriving from Amazon and various outdoor outfitters and bike stores with bits and bobs to convert my backpacking setup into a bike touring setup. I am keeping things fairly minimal - i don't want to sink a grand into bike touring gear and then get a week in and decide i hate it, and then i wasted a grand. But also i don't want to bodge together a bunch of trash with duct tape and a prayer and then break down in the middle of nowhere and die because i was an idiot. Almost everything i am getting is dual-use for overnight hiking.

The most unusual and almost certainly useless thing that i have bought is an Ursack, which is a bag made out of some kind of indestructible material that bears cannot get into. I bought it because i am terrified of bears. I am terrified of all animals either faster or heavier than me, and bears are both. Anyway, an Ursack is a thing that you are supposed to put all of your food and toiletries into, then tie it to a tree somewhere far away from your camp. When the bear smells your food, it will spend a couple hours squishing your Ursack, instead of squishing your tent. If you bought food that is squish-resistant, it should still be edible when you head over there the next morning.

The reason it's almost certainly useless is because i do not intend to sleep anywhere where bears are more likely to show up than local area kids or homeless people. And, close to town, any bears are more likely to investigate a backyard garbage can full of goodies than a backpack with a jar of peanut butter in it. I suppose rats are far more likely midnight visitors, and their little teeth can spike through otherwise indestructible Ursacks. But rats are small and relatively slow so i am not terrified of them. Anyway, whatever, this stupid bear-proof sack gives me peace of mind.

I suppose i should get bear spray in case i meet one in the day time, but it seems like an annoying and dangerous thing to carry around. I hate weapons and do not like the idea of having to fight anyone or anything when i am supposed to just be enjoying a journey.

My panniers (fancy cyclist word for saddlebags) arrived the other day and i did a really quick check to see how many more bags i would need. This is a picture of my bike with two panniers and my non-waterproof daypack (which will soon be replaced by a larger, waterproof daypack). All of the clothes that i own are in there. And my sleeping bag. And my tools. The only things that aren't in that picture that i plan to bring are tent, sleeping pad, food and toiletries. Most of which should fit into the extra space in the bags, since i did not pack them full.

The good news, then, is that i almost certainly will not need to also buy front panniers, which are a bit fiddly (and expensive) to set up on a bike with front shocks. What i will try to do, though, is find a way to strap my sleeping bag (or possibly my tent) on the front. (Poles will go strapped under the bar where the lock is now.) I think i could probably jam everything on the back, but it would be nice to have a bit of spare room in case i realize i really need something that i don't have. Most likely more water (if it's dry) or a poncho (if it's wet). Also hardcore cycle nerds say it's better to put weight on both the front and the back instead of just the back.

I dunno, it all feels a bit hypothetical at the moment. Like, i have all this stuff, but will i really do this?

The weird thing is that i don't feel like this when i backpack normally. I just walk out of wherever i was with my backpack and... keep walking. Usually then i jump on a train or a bus. Then i walk some more. It's not a big deal. But for some reason, putting all the stuff onto a bike, it feels like a much more adventurous thing. I am a bit worried about it. I guess because - especially here in the North American west - the distances are longer, and you're liable to be on your own a lot more.

But, i suppose, if i never try it, then i'll never know.

I really um-ed and ah-ed about getting a car. Theoretically it makes getting to places where there is no bus easier. But i just can't see it as a fun and relaxing way to travel. Even if i try to ignore the pollution factor, cars are so expensive to purchase and maintain. And they're so much paperwork to set up. Licensing, registration, insurance, you can never really be an anonymous drifter when you have a car. I feel like a bike will give me all the perks without all the stress.

But if i really can't do it, maybe because my body is too decrepit, or because i find passing cars to be even more terrifying than bears, or because i find futzing with flat tires to be too much of a hassle, then, fuck it. I will go back on foot.

Which is where i am at right now. I pulled up at the bike store yesterday and asked for a full tune-up before i load it up and start stretching for longer distances, and they said it'd be a few days. Grumble grumble, my bike's in the shop and now i can't fantasize about my grand tour, or even practice hauling gear close to home. Here is a picture of my unloaded trip up to the grasslands the other day. Due to the wildfires the rangers turned me (and lots of hunters/fishermen) around. 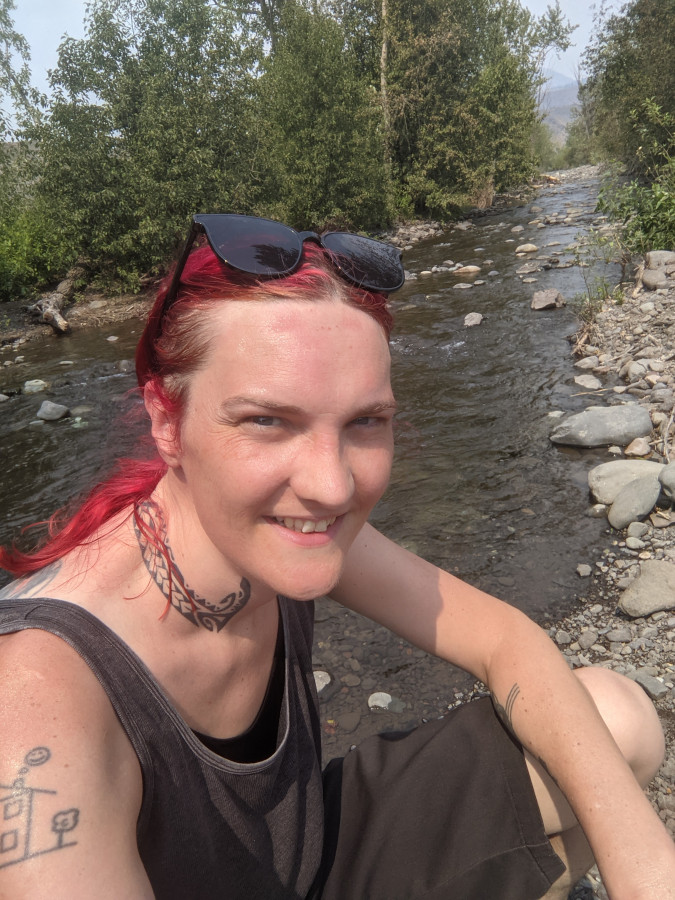 I sat by the creek instead. If i was on the road for real, i could fill up a water bag and filter it in a spot like this.

Next Tuesday i am getting my second shot, so by end of July i will be fully vaxxed and ready to roll. If they open the border too, i will be thrilled.

Am i nuts, you guys? I just wanna travel again.
Collapse